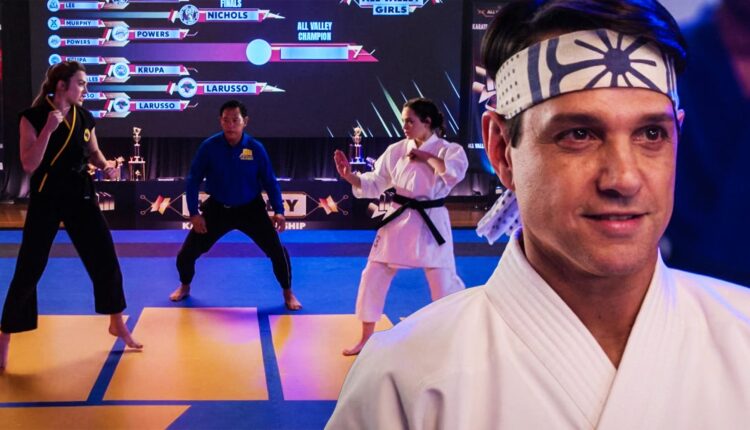 An alternate ending to Cobra Kai season 4 that was shot would have changed season 5 in 4 major ways. Cobra Kai season 4 ended with Tory Nichols (Peyton List) defeating Samantha LaRusso (Mary Mouser) to win the girls’ All Valley Under 18 Karate Championship. As per the bet that was made in Cobra Kai season 3, the black and yellow dojo’s win meant that Daniel LaRusso (Ralph Macchio) and Johnny Lawrence (William Zabka) must close their dojos, Miyagi-Do and Eagle Fang Karate, respectively. However, Tory later learned that her sensei, Terry Silver (Thomas Ian Griffith), paid off the referee so she could win the All Valley final.

The cast and creators of Cobra Kai celebrated the show on May 5, 2022, with Cobra Kai: Live and Badass, at an event at Microsoft Theater in Los Angeles where they revealed the teaser trailer for Cobra Kai season 5. But as a bonus treat for the live audience, Mary Mouser showed a clip of the alternate ending that was produced where it was Sam who scored the final point and beat Tory for the All Valley Championship, complete with a victory celebration. William Zabka and Ralph Macchio explained that the alternate ending was filmed for the extras in the crowd and to avoid spoilers leaking. (Macchio also pointed out that in the alternate version, Sam won the All Valley “fairly,” unlike Tory.) Zabka assured everyone that Tory winning was always the planned season 4 outcome but he indicated there was a chance it might have been changed in the editing room if Cobra Kai’s executive producers decided to go in a different direction.

How Sam Winning The All Valley Would Change Her And Tor

Sam LaRusso winning the All Valley would have changed Cobra Kai season 5 and her, but not necessarily for the better. In Cobra Kai season 4, Sam embraced Johnny Lawrence’s teachings and Eagle Fang’s more aggressive and “badass” karate style, to the chagrin of her father Daniel. Mr. LaRusso authorized Sam to combine both Miyagi-Do and Eagle Fang styles against Tory so, in the alternate ending, it would have made perfect sense that Sam’s hybrid fighting method would have defeated Nichols. A victorious Sam would also have meant Miyagi-Do and Eagle Fang won their feud with Cobra Kai. But Sam herself wouldn’t have been humbled by losing to Tory, as painful as it was. Sam winning could have led to a swelled head and further tapped into LaRusso’s dark side.

As for Tory, losing to LaRusso may actually have been less devastating than finding out she didn’t win the All Valley fair and square. Tory felt she could defeat Samatha on her own merits, and she thought she did until she learned Terry Silver greased the wheel in her favor. This completely took the joy out of Tory’s championship. Had Tory lost, it’s likely she could have still discovered Silver cheated on her behalf. As betrayed as she would feel, Nichols could at least take solace that she didn’t lose to LaRusso because Sam was better. Either way, Tory is still bound to retaliate against Terry somehow in Cobra Kai season 5 but had Sam won, Nichols could have felt like the more deserving “uncrowned” All Valley Champion instead of knowing she didn’t really win because she was better than LaRusso.

Samantha LaRusso winning the All Valley would have cut Terry Silver’s grand plans for Cobra Kai off at the knees. Silver banked on Tory and their dojo winning to fuel his scheme to open Cobra Kai franchises all over the San Fernando Valley – which was already well underway before the tournament even took place. Sam beating Tory would have ruined Silver’s expansion just as Daniel beating Cobra Kai in The Karate Kid Part III destroyed Silver’s identical idea back in 1985. However, it’s highly doubtful that Terry would honor the conditions of the bet and close down Cobra Kai if LaRusso won the All Valley. Silver’s loophole would probably have been that it was a bargain Johnny and “Danny-Boy” made with Kreese, not him. Terry Silver would find a way to keep Cobra Kai alive no matter what, and he’d be out for revenge.

Meanwhile, Silver would have still betrayed John Kreese (Martin Kove). Terry’s plot to frame Kreese for the attempted murder of Stingray (Paul Walter Hauser) was in play before the All Valley. No matter what, Silver wanted to exact retribution for how his best friend John treated him, and Terry desired full control over the Cobra Kai empire. So, Keese’s fate would have remained the same and he’d still have been arrested. At least, that one part of Silver’s machinations would have worked out as he intended even if Sam LaRusso won the All Valley.

Daniel Wouldn’t Have Called Chozen (Yet)

Daniel would’ve been riding high if Samantha won the All Valley. It would have meant the LaRussos would be the first-ever father and daughter to become All Valley Champions. Daniel-san would also likely begin aggressively recruiting more students for Miyagi-Do once it becomes clear to him that Terry Silver would renege on the promise to shut down Cobra Kai. But it’s likely Daniel-san wouldn’t have called Chozen (Yuji Okumoto) as his reinforcements if Sam won the All Valley. Mr. LaRusso might have felt that he and Johnny could handle Silver themselves.

Still, with Johnny leaving town to get Miguel Diaz (Xolo Maridueña) back from Mexico, Daniel might have called Chozen in anyway, but possibly to help him run both Miyagi-Do and Eagle Fang in Johnny’s absence. The circumstances for Chozen evening the odds against Terry Silver wouldn’t be out of desperation on LaRusso’s part, but it’s likely Daniel would have summoned his Miyagi-Do “karate cousin” for help sooner rather than later in Cobra Kai season 5.

Johnny Would Still Go After Miguel But What Happens When He’s Back?

In an alternate reality Cobra Kai season 5, Johnny and Robby would still go after Miguel in Mexico just as the Cobra Kai season 5 trailer shows. What happens when they come back is the big question because Johnny would return to a scenario where he and Daniel’s partnership is still intact as they run both of their dojos. But overall, Johnny actually got what he always wanted throughout Cobra Kai – a new start with Robby – at the end of season 4 and it likely would have happened either way had Sam won the All Valley or not. It will be most interesting what Johnny Lawrence does next in Cobra Kai season 5, which may not be all that different from the alternate reality where Sam LaRusso won the All Valley.

John Orquiola is a Features staff writer and interviewer who has been with Screen Rant for five years. He began as a director’s assistant on various independent films. As a lover of film and film theory, John wrote humorous movie reviews on his blog, Back of the Head, which got him noticed by Screen Rant. John happily became the Star Trek guy at Screen Rant and he leads feature coverage of the various Star Trek series, but he also writes about a wide range of subjects from the Marvel Cinematic Universe to Cobra Kai. His other great nerdy love is British TV series like The Crown, Downton Abbey, and Killing Eve. John can be found on Twitter @BackoftheHead if you want to see photos of the food he eats.