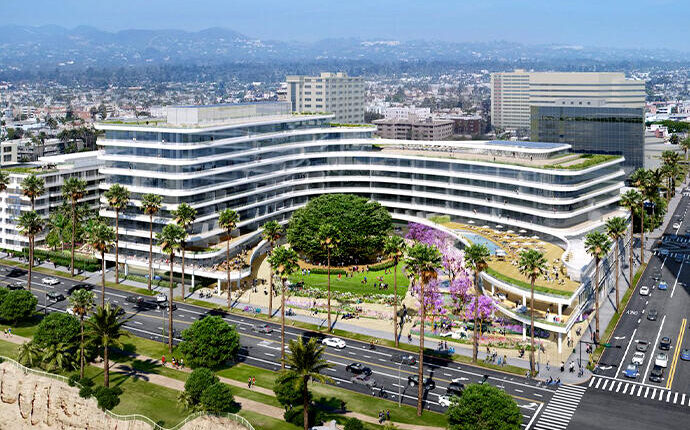 The California Coastal Commission has signed off on a revised plan to redevelop the century-old Fairmont Miramar Hotel in Santa Monica.

The state’s coastline regulator approved a proposal by the Athens Group to greatly expand the seaside hotel at 101 Wilshire Blvd., the Santa Monica Daily Press reported. The Phoenix-based developer, acting on behalf of property owner MSD Partners of New York, aims to transform the property, a block-sized hotel on a bluff overlooking the Pacific Ocean.

In September 2020, the City of Santa Monica approved the 4.5-acre redevelopment project. A newly named Miramar Santa Monica would include 312 hotel rooms, 60 profitable condominiums, 18,000 square feet of ground-floor shops and restaurants, and a 428-vehicle garage. As part of the deal, Athens would pay for the construction of at least 42 affordable housing units at a neighboring site on 2nd Street. The firm would also provide $5.34 million for senior programs, transportation improvements, and early childhood programs.

The Coastal Commission also requested an additional $6,477 million of “in-lieu” fees to help offset the lack of low-cost hotel rooms, the newspaper reported. Redevelopment of the now 102-year-old hotel was first proposed in 2013, but five years later Athens scaled back a 320-foot tower unpopular with residents. The height was reduced to 130 feet — the upper limit on downtown projects that Santa Monica officials had recently adopted.

Its curving white design is by Pelli Clarke & Partners, and includes a renovation of the historic Palisades Building, built in 1924. Argentine-born César Pelli, a world-renowned architect who helped design the new Miramar, died in 2019 at age 92.

Half of the property will be kept open. An event space will be built next to the landmark Moreton Bay Fig Tree, planted in 1879, which will sit at the center of a garden facing Ocean Avenue and Wilshire Boulevard.

To complete the project, Athens Group will face a design review with the City of Santa Monica, which includes going before an architectural review board and landmarks commission.

Exclusive patch of dirt on market in Beverly Park

The 7 Most Anticipated Spring 2022 Openings in Los Angeles