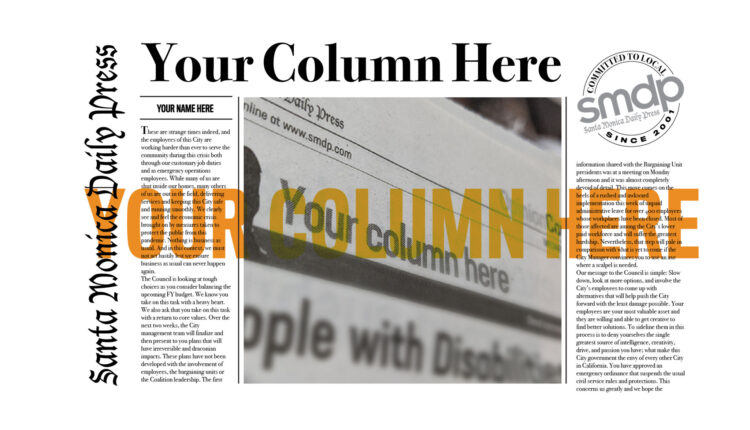 It seems that our nation is finally trying to face the aftermath of the generations created by the institutionalization of systemic racism in the Jim Crow era. As we know, Santa Monica has its own “ghosts in the closet,” while California cities like Burbank, Glendale, Pasadena, San Jose, and Redwood City also grapple with a common racist history. Past mistakes include exclusionary practices towards “non-whites” that often lead to community destruction, neighborhood redlining and support for “sundown towns”. Blacks have been warned to stay away from the sinking cities after sunset or to face the wrath of unspeakable discriminatory acts. At the beginning of the 19th century, Santa Monica initially offered great opportunities for African American companies such as the La Bonita Bathhouse, Thurman’s Rest A While Apartments, The Dew Drop Inn, and Café for Inkwell Beachgoers. All of that changed, however, in the 1920s when local groups of the Ku Klux Klan tried to prevent “non-whites” from thriving in Santa Monica. Ultimately, the city enforced a “Caucasian Clause” of systemic guidelines preventing African American residents from owning shops or houses on the beach. Yes, all of this happened before the areas were displaced by the Bel Mar and 10 Freeway-Pico Corridor areas in the 1950s and 1960s. In addition to implementing the “Right of Return” guidelines, our city council should also issue a formal apology in the form of an official resolution recognizing deep-seated racial injustices in Santa Monica. This formal apology MUST and SHOULD address ALL the racial inequalities inflicted on Santa Monica’s diverse residents.

Racially motivated discriminatory practices extended to all “non-white” Santa Monicans, prohibiting the sale, transfer or leasing of property to “any person of the African or Black, Japanese, Chinese, Jewish or Hebrew races or their descendants”. To be clear, although the Supreme Court ruled restrictive alliances unconstitutional in 1948, Santa Monica put in place widespread discriminatory policies in the 1950s and 1960s. Racist tactics included harsh discrimination against Japanese Americans returning from internment camps, the Santa Monicans – with innumerable inability to reclaim lost homes and worldly property. Jewish American residents also experienced redlining and covenant restrictions when trying to buy homes and conduct business outside the Pico area. To date, only a few blacks and browns live in R1 zones in a city where 32% of the land is designated as single-family homes. A fact attributed to the single-family zoning, or R1, which bans housing in apartment buildings – housing badly needed for low-income Santa Monica residents. How can a policy of the “right of return” justly compensate for decades of injustice? How will we ensure that diversity and inclusion are preserved, thereby preventing further suffering and suffering for the generations?

With a clear conscience, Santa Monica MUST and SHOULD recognize and formally pass a resolution that apologizes for its racist past and the ongoing harm against colored and marginalized communities. The commitment to systemic change begins at the point of consciousness. Santa Monica should publicly accept responsibility for contributions to its erroneous ways. In October 2020, the city of Glendale publicly apologized and passed a resolution to address its history as a “sunset city” and prevailing systemic problems. Last October, San Jose filed a similar apology for enforcing anti-Chinese policies, including the demolition of 2nd Market Street Chinatown. Will Santa Monica publicly apologize for its racist past? Is a formal apology required from the Santa Monica City Council? The redesign of an inclusive Santa Monica begins with recognizing and submitting a formal apology for the decades of racial injustice and discrimination that have prevailed not only against black / African American but also indigenous American, Latino / X-American, Chinese American, Japanese Japanese, Jewish American and the LGBTQ community. A formal apology, a resolution of this magnitude, willfully acknowledge, accept, and commit to correcting the mistakes of the past by ensuring a more diverse and inclusive Santa Monica.

What You Should Know – NBC Los Angeles