City hall murals are not what we want to be 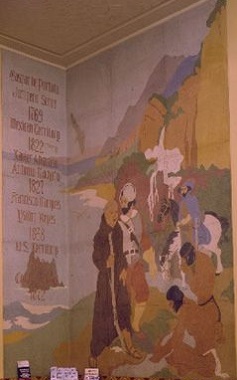 City hall murals are not what we want to be

The city council has voted to temporarily cover two racially charged, faulty murals in the town hall entrance, while discussions continue about what, if anything, to be done about it (“Council votes to cover historic mural in town hall lobby” , May 14, 2021)

I think it is important that we first see if we can agree on the problem with these murals and what they represent. This is necessary because some believe that we don’t have a serious problem or believe that any problem can be easily fixed.

While there are many things we can be proud of, there are two basic realities that I believe are crucial:

1. Our country is in the midst of a race-fair reckoning. On the ground, what we were taught about California and US history often ignored the devastation of the indigenous peoples and a nasty history of anti-Asian, black, and Latin American acts. Certain public art and statues that previously existed are no longer okay. And that’s good.

2. The US, California, and yes, Santa Monica have a turbulent racist past and present, a painful history of racism and inequality that are still part of everyday life. There was redlining on site at the time these murals were being painted. Later the I-10 freeway was built, which destroyed a largely black neighborhood. There were serious – ongoing – limits to basic justice, employment and business opportunities.

These murals, painted in the late 1930s, are public art. They are each two stories high and are prominently located at the entrance to our seat of government, the town hall. They should be seen and say who we were and are.

The left mural, Historic Santa Monica, shows two natives kneeling in front of a missionary brother and two conquistadors. Yet the missions and conquistadors were largely not the friends of the indigenous peoples, many of whom were displaced, slaughtered, or enslaved nationwide.

This mural is purported to depict a purported historical moment by indigenous peoples, generously showing where to find water – which led to the founding of our city. Of course, many Native American generosity have been far from reciprocated.

Unfortunately, the mural distorts history and undermines our values. The mural does not show a meeting at eye level. The natives kneel, submissively, drinking by the stream. The monk stands over, doesn’t kneel or tastes the water.

And why does a conquistador stand up with a sword at his side, and only his horse goes along to taste the water? Why are the faces of the monks and conquistadors shown in full, but not those of the natives?

Gabrielino Indian gang leader Andrew Salas says the mural misrepresents history, ignores the real heroes who resisted oppression, and it should be the settlers who kneel and say thanks, not the opposite.

The mural on the right (the leisure mural) should depict sport in our current city. But it only shows white, richly dressed people who mostly practice the sports of the then wealthy white elite: especially polo, car racing, tennis.

No colored people or sports of workers are shown. Indigenous peoples mysteriously disappear between the two murals. You have become invisible. Associated with history while they’re still very much here.

But that is what the visitor is confronted with when entering the town hall. We should not underestimate the qualitative effects of a constant flood of racist messages and images on all of us, especially on young people. (Unsurprisingly, only one of the 10 people in the two murals is a woman.)

Monument protection is very important. The artistic freedom is even more. But we don’t accept either of these as excuses from racially charged public embassies, such as Confederate generals sitting in town squares touting their leadership of insurgent troops who support slavery.

Regardless of the fame or quality of the artist or the supposed truth of the moment, many people in our country do not want their community to be defined by these works.

Taken together, these two most iconic public murals don’t tell the story of Santa Monica the way it should be told. They do not represent who we really are, our supposed values, or the serious challenges we still face. Who we want to be.

Remember, we are declaring ourselves a city of progressive values, inclusiveness and equal justice. We shouldn’t resist change, we should be at the forefront. All of this requires a difficult and open community discussion.

Jeff Gordon is a long-time Santa Monica resident and a member of the board of directors of the North of Montana Association (NOMA).