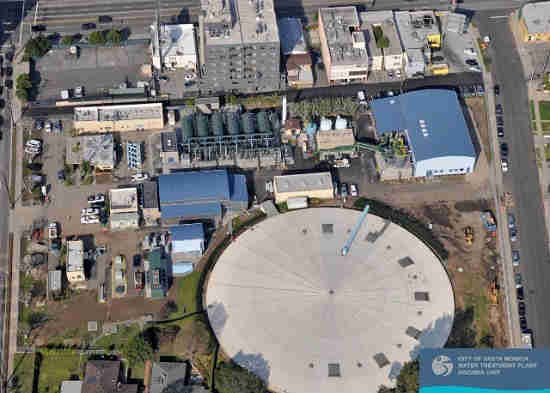 From the Lookout staff

The two projects will “help the city become water self-sufficient by 2023 by developing a sustainable and drought-resistant water supply and expanding groundwater production,” city officials said.

The restoration of Olympic Well Field could provide up to 3,200 acre-feet of groundwater per year (AFY) through the construction of an Advanced Water Treatment Facility (AWTF), among other things.

Walsh Construction, an Illinois-based company, and Brown and Caldwell are working on the project, which is expected to be completed by mid-2023.

Thursday’s groundbreaking will be at 9:00 a.m. at the Arcadia Water Treatment Plant, located on a 12-acre site at 1228 South Bundy Drive in Los Angeles.

When it was approved nearly a decade ago, the city’s Sustainable Water Master Plan predicted that Santa Monica could be entirely dependent on its own water by 2020.

The goal was contingent on further maximizing the use of local water resources and implementing water conservation programs (“Santa Monica on Track to Water Self-Sufficiency,” July 16, 2013).

The 2018 update to the Sustainable Water Master Plan (SWMP), adopted by the council, is expected to pay off in 2029, six years after the projects were due to be completed in 2023, the staff said.