Chris Rock and Will Smith’s Oscars 2022 feud has history 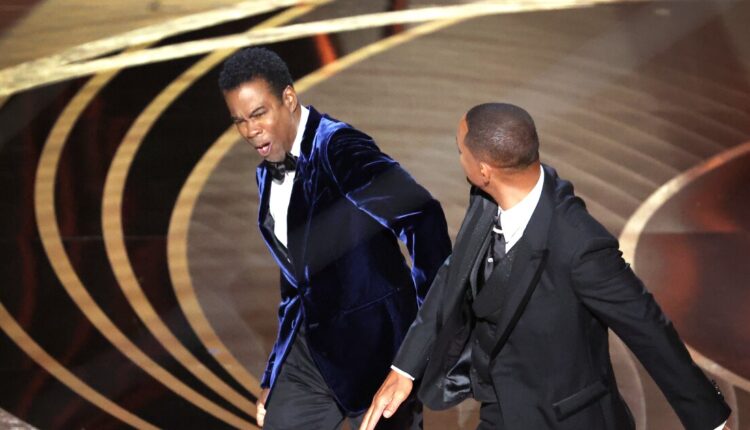 It’s a moment that’s already been pored over like the Zapruder film, looked at from various feeds and angles and accounts: Will Smith slapping Chris Rock in the face Sunday night onstage at the Academy Awards.

The nightclub-style seating in this year’s stage design may have been created with social distancing in mind, but it also put Smith and his wife, Jada Pinkett Smith, within easy striking distance when Rock made a joke at Pinkett Smith’s expense.

Remarking that he was looking forward to seeing Pinkett Smith’s closely cropped hair in a sequel to “GI Jane,” Rock apparently did not take into account that she has been increasingly open about suffering from alopecia-related hair loss. Smith took to the stage, struck Rock with an open palm, returned to his seat and said loudly, “keep my wife’s name out of your f— mouth.”

The audience feel into a stunned hush.

Rock, Smith and Pinkett Smith do have some history. Rock appeared on an episode of Smith’s sitcom “The Fresh Prince of Bel-Air” in 1995 and was a voice actor alongside Pinkett Smith in three animated “Madagascar” films.

More recently, however, Rock has used Pinkett Smith as a punchline before at the Academy Awards. In 2016, for the second year in a row, all 20 acting nominees were white. Smith — already a two-time nominee for “Ali” and “The Pursuit of Happyness” — was not nominated for his role in the sports drama “Concussion.” Pinkett Smith publicly declared that she was boycotting the Oscars and would not attend.

In a video announcing her decision, she addressed Rock, already announced as that year’s host, saying: “Hey Chris, I won’t be at the Academy Awards, and I won’t be watching. But I can’t think of a better man to do the job at hand this year than you, my friend.”

In his opening monologue Rock addressed the controversy of a second year of #OscarsSoWhite in part by saying, “What happened this year? What happened? People went mad. Spike got mad. Sharpton got mad. Jada went mad. And Will went mad.

“Everybody went mad, you know. It’s quite like, Jada got mad? Jada says she’s not coming. protesting I’m like, ‘Isn’t she on a TV show?’ Jada’s gonna boycott the Oscars? Jada boycotting the Oscars is like me boycotting Rihanna’s panties. I wasn’t invited.”

When Rock took to the Oscars stage on Sunday night, ostensibly to present the best documentary feature award to Questlove’s “Summer of Soul,” the comedian perhaps knew he might spark some tension by joking about Smith and Pinkett Smith.

Will Smith and Jada Pinkett Smith walk the red carpet of the 94th Academy Awards.

It probably didn’t help that the couple had been the butt of a joke earlier in the night, when co-host and single woman Regina Hall was attempting to get single men onstage. She said to Smith, who has spoken about a period of non-monogamy in his relationship with his wife: “You’re married, but you know what? You’re on the list, and it looks like Jada approved you, so you get on up here!”

This year’s chaotic show was turned on his head when, about an hour after he slapped Rock, Smith won the lead actor Oscar for his role in “King Richard,” in which he plays Richard Williams, father of tennis stars Venus and Serena Williams.

Crying and standing onstage for more than five minutes, Smith added that the night’s events was another example of art imitating life. “I look like the crazy father just like they said about Richard Williams, but love will make you do crazy things.”