Cheeto’s Flamin’ Hots Made Me Who I Am 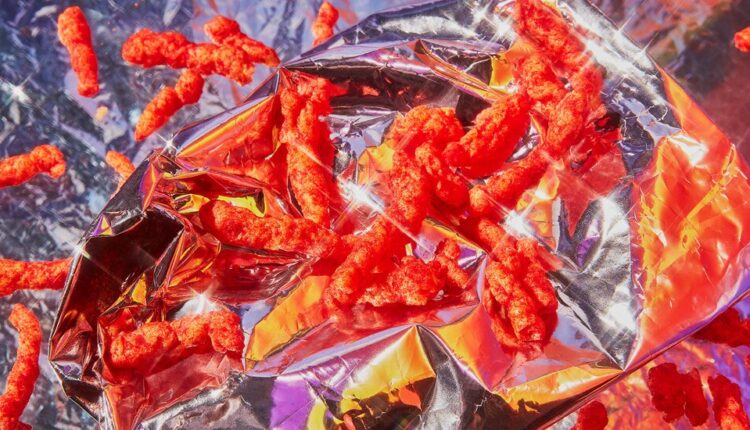 After school, I learned how time and space work in Los Angeles: how people’s relationships to the city are shaped and distended by commutes, the demands of child care and the ebb and flow of rush hour. My mom’s work was close to school, but on days I stayed with my dad, he drove from the Valley. When my mom needed extra help, my grandma drove from Hacienda Heights and stayed over, or my uncle drove from Torrance and back again. We took indirect routes to and from school across an array of neighborhoods with their race and class differences. When I was in seventh grade, after I had switched to a private school in Santa Monica, my mom and I moved to Topanga Canyon with my stepdad; my world became smaller, whittled down to the Westside.

But those after-school hours afforded a more capacious sense of place; Flamin’ Hots guided me across that geography. With a tug of the bag, the edges of your nostrils singed with anticipation. You shoved your hand in the bag, wedging each Flamin’ Hot between your fingers, and with each crunch the burn grew, but you couldn’t stop, not until you funneled the last crumbs at the bottom of the bag into your mouth.

Not everyone could take the heat, and those who went straight home after school didn’t know to go across the street. I also doubt that they knew how to place the nuanced flavor of the Flamin’ Hot spice, which now reveals to me a hidden map of LA’s sprawl, constellated by its overlooked, disregarded communities of color, undetected by and adjacent to the richer, whiter sheen of the westside. Flamin’ Hots tasted like the Tajín seasoning sprinkled on fries and cups of mango, melon and pineapple sold by fruit-cart vendors on the Eastside of LA; the powder packets in Shin Ramyun noodles stored in a cousin’s kitchen cupboards in Orange County; Tapatío and Valentina hot sauce slathered on tacos and burritos from a truck or a strip mall; and even, with its slight hints of onion and garlic, a bit like kimchi from big plastic tubs sold at H Mart in Koreatown or Greenland Market in Van Nuys or Rowland Heights, where my grandma shops.

In school, my preteen insecurities became indistinguishable from my insecurities around not being able to afford the Kate Spade bags that my white, wealthy classmates clutched. After school, then, was a time when those I envied and was invisible to were no longer there to remind me of what I wasn’t and what I didn’t have. After school, Flamin’ Hots were what my friends and I had that the others did not.

Something as perfect as Flamin’ Hots could only come out of unauthorized innovation: a challenge to acceptable taste that embraces artificial excess. On its face, it was proof of American ingenuity, with the implicit lesson that Flamin’ Hots were for everyone — a product of the self-made Everyman. But as the upset around The Times’s discovery makes clear, there are some of us for whom what’s on the record matters less than the unofficial, self-mythologizing stories we conjure to tell. I like to think that Flamin’ Hots are for those of us who, like Montañez, take up residence in the after-hours, when tall tales are the order of the day. They’re for those who rule the school when no one else is around, leaving no trace behind — except the faded stain of dust in the telltale shade of Red Dye 40 on our tongues, lips and fingers.

Super Bowl ‘No Drone Zone’ planned for Los Angeles, with drone pilots facing $30,000 fine if they fly near SoFi Stadium