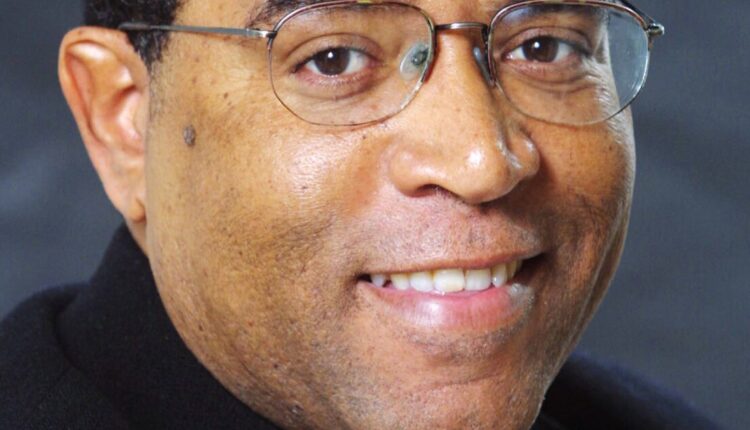 Earlier this month, on Oakland street was named after Chauncey Bailey. The journalist had a big impact on California with his dogged reporting and commitment to telling stories about Black communities.

His name is one that every resident of the state should know, both because of the impact he had on California, and also because of the dramatic circumstances that led to his death. To help make that a reality, I’m going to tell you the story of his life and his brutal killing.

Bailey’s career in journalism was extensive and varied. He grew up in Oakland and earned a degree from Merritt College and a bachelor’s degree in journalism from San Jose State University, according to The Chauncey Bailey Project, a journalist collective dedicated to preserving his legacy. He also attended a Columbia University summer program.

For a time, he simultaneously wrote at the Oakland Post and appeared on air for San Jose-based television station KNTV. Then he spent three years at the San Francisco-based newspaper Sun Reporter and, subsequently, three years at the Hartford Courant in Connecticut. Eventually, he began a decade-long stint at The Detroit News, followed by a 12-year run at the Oakland Tribune. He then served as a freelance travel writer for The Oakland Post before becoming its editor in June 2007.

Bailey was known as a brave journalist who would ask the first question at press conferences, according to Oaklandside. He wasn’t afraid of asking officials tough, pointed inquiries. He was also part of a generation of Black journalists who experienced both Jim Crow and the civil rights movement, and brought that knowledge to newsrooms.

“In his whole time at the Tribune, he had a voice and a perspective on the Black community in Oakland that we really have not replaced since he left,” former Oakland Tribune managing editor Martin Reynolds was quoted as saying. “He never missed anything; he was always diligent in trying to cover these stories.”

“People might be upset at him, but Chauncey didn’t go around making enemies,” Gwendolyn Carter, advertising manager of the Oakland Post, said in 2007. “He was a wonderful guy.”

Bailey’s death, and the impact

On Aug. 2, 2007, Bailey was shot three times with a sawed-off shotgun in broad daylight while walking to work at 7:30 am He was shot in the back and in the head, and pronounced dead at the scene. He had just visited McDonald’s for breakfast not far from his office, The New York Times reported.

A masked gunman fled the scene in a van. The Oakland Police Department immediately treated the shooting as a contract killing. Police soon learned that Bailey was working on a piece examining financial allegations against a local business named Your Black Muslim Bakery.

Devaughndre Broussard, who was 19 at the time and served as a handyman for the bakery, admitted that he shot Bailey. However, he said he did not act alone in the attack that was meant to prevent the newly appointed editor from publishing a story that would be critical of the bakery and its leaders.

Broussard and getaway driver Antoine Mackey were convicted of murder, as was Yusef Bey IV, the son of the bakery’s founder. After Bailey’s death, several shocking stories about the elder Yusef Bey involving sexual assault against children and other crimes were revealed.

On March 5, 2022, a ceremony was held to name the stretch of 14th Street between Lakeside Drive and Broadway— the site of the journalist’s killing — after Bailey.

“Following the investigation into those who killed Chauncey — and I will not utter their names — books were written, awards were won, and people went to jail,” Reynolds recently said at the street naming ceremony, according to Oaklandside. “But the most tragic thing that happened was a son lost a father.”

“Killing a reporter is akin to killing a judge or a police officer. You’re not just murdering the person, you’re attacking the role: the robe, the badge, the notebook, the camera,” Patt Morrison wrote in 2007.

Note: Some of the sites we link to may limit the number of stories you can access without subscribing.

Coronavirus cases are on the upswing worldwide, prompting some officials to warn that California could see increases this spring because of the Omicron subvariant BA.2 even though the number of cases so far has been modest. So far, coronavirus cases are still declining across California. But even with the decline, officials are closely watching how the Omicron subvariant BA.2 — which is 30% to 60% more contagious than the original Omicron variant — is making up a growing percentage of new cases. Los Angeles Times

Runners take off from Dodger Stadium during the 37th annual Los Angeles Marathon in Los Angeles.

The Los Angeles Police Department is offering a reward for information on the driver of a rented Tesla that crashed into two parked cars early Sunday morning while attempting a dangerous stunt in Echo Park. The 2018 Tesla S-BLM was temporarily airborne at the intersection of Baxter and Alvarado streets before smashing into two vehicles and several trash cans, the LAPD said. For the internet, the black Tesla was a viral moment to behold. But to musician Jordan Hook, it was just the car that crashed into his Subaru. Los Angeles Times

USC was in a free fall. Then it turned to Rick Caruso. In 2018, USC was reeling from revelations about a campus gynecologist who was accused of abusing hundreds of students and alumni. Embattled President CL Max Nikias summoned billionaire Rick Caruso, who stepped into the volunteer post and quickly transformed it into a full-time position. Now running for mayor, Caruso is inviting voters to look closely at what he’s done while at the school. Los Angeles Times 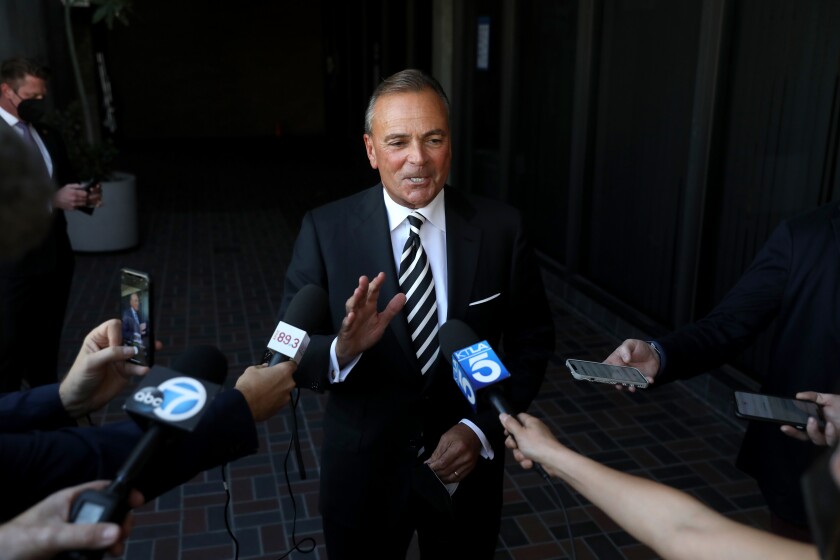 Rick Caruso meets the press after filing paperwork to run for mayor of Los Angeles at the city clerks office on Feb. 11, 2022.

A mother and her fiancée were sentenced this month to 22 years to life in state prison for torturing and killing her 3-year-old son. Gilbert Escamilla had several injuries when Modesto police and medical personnel responded to a report of a child not breathing at an apartment building in 2017. The toddler was taken to a hospital but died soon after. Connie Marie Escamilla, 29, and her fiancée, Kylie Mykaela Ann Beasley, 25, were arrested. After claiming some of the injuries came from a car crash, they both admitted they were untruthful and blamed each other for the child’s death. Modesto Bee

A man who has already been sentenced for sexually assaulting a Northern California woman has received another sentence of 31 years in state prison. Matthew Muller was already serving a 40-year sentence for federal crimes after a case in which he kidnapped Denise Huskins. The case made headlines because police initially believed the abduction was a hoax. Evidence gathered from a June 5, 2015, home-invasion robbery eventually helped authorities link Muller to the kidnapping. The Guardians

HEALTH AND THE ENVIRONMENT

UCLA will provide free menstrual products in bathrooms across campus. Starting April 4 the school will offer the products in an effort to improve the well-being of individuals on campus, according to a campus-wide email. UCLA becomes the first University of California campus to do so, but the California Menstrual Equity for All Act of 2021, previously signed by Gov. Gavin Newsom in October, will require all state public universities to provide complimentary menstrual products starting with the 2022-2023 school year. Daily Bruin

The $141-million offer by Fashion Nova founder Richard Saghian for the Bel-Air mega-mansion known as “The One” was approved Monday by a US Bankruptcy Court judge. The ruling by Judge Deborah Saltzman followed a two-day court hearing during which creditors opposed to the sale alleged that Saghian’s bid should be found inadequate because the three-day auction for the sprawling estate came within a week of Russia’s invasion of Ukraine, scaring off bidders. Los Angeles Times

Grocery workers across Southern California began voting Monday to authorize a strike against Ralphs, Albertsons, Vons and Pavilions in an effort to pressure the companies to raise wages. More than 47,000 workers at 500 stores are eligible to vote over five days, with the result expected to be announced Sunday. Intense negotiations had taken place since January, “proceeding at a regular rhythm,” said John Grant, president of UFCW 770. “Then two weeks ago it came to a screeching halt. I believe the companies wanted to see if workers are going to stand up and ask for the contract they deserve.” Los Angeles Times 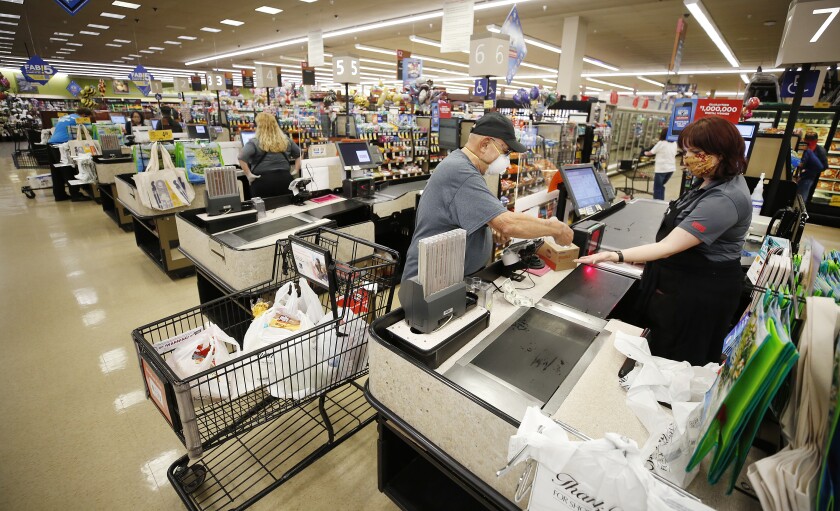 Vons cashier Linda Poland has worked 27 years in the store at 24325 Crenshaw Blvd in Torrance.

Get our free daily crossword puzzle, sudoku, word search and arcade games in our new game center at latimes.com/games.

It was an evening in June. I was driving back from a friend’s house crossing the infamous and now eradicated “Devil’s Slide” that connected Pacifica to my high school home in Montara. The fog was so heavy it flooded the curving roads with no regard to driver safety. The June gloom and wind were alive that night. I first learned to drive on a road that most of my peers, as well as community leaders, deemed dangerous. It was eroding as if it wanted to return to the frothy ocean. For me, it was the path to my home above the ocean and fog. It guided me home and waltzed me through the winding course floating around my little car like it knew my intention. This is an ode to Devil’s Slide for getting me home every day. Rest peacefully in your fog.

If you have a memory or story about the Golden State, share it with us. (Please keep your story to 100 words.)