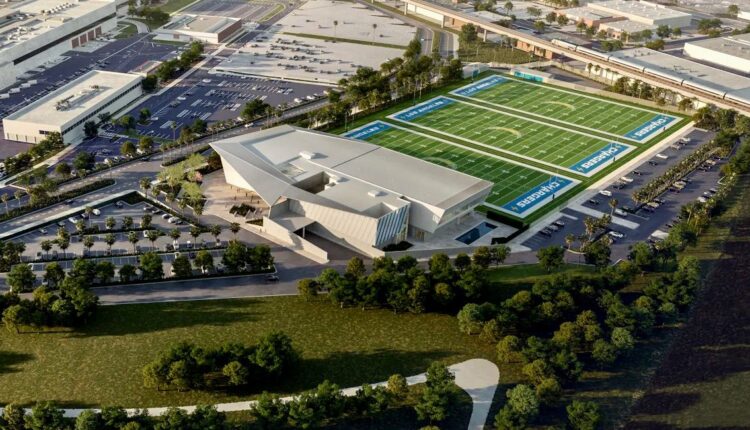 EL SEGUNDO, Calif. (AP) — If anyone had doubts about the Chargers’ future in Los Angeles, owner Dean Spanos is hoping Wednesday’s ceremonial groundbreaking for a new team headquarters answers them.

The Chargers have already started work on the 14-acre site, which is slated for completion in July 2024.

“It’s been five years in the making. We finally have our home for the future. This is our home now,” Spanos said.

The Chargers left San Diego for Los Angeles in 2017. They played in a soccer stadium in Carson for three seasons before becoming co-tenants with the Rams at SoFi Stadium in 2020.

While searching for a location for a permanent facility, the Chargers have had temporary headquarters in Costa Mesa — which is in Orange County — since 2017.

Most of the sites the Chargers considered for their new home were in Los Angeles County.

The headquarters will be less than 3 miles from Los Angeles International Airport and 7 miles from SoFi Stadium. Sonnenblick-Eichner Co. of Beverly Hills announced in March it has arranged $276 million of construction and permanent financing for the facility.

The complex was designed by Gensler Sports and includes three full-size fields, along with a main building that includes team meeting rooms, training space, a rooftop hospitality club and an Esports gaming studio. It will also host Chargers training camp.

Quarterback Justin Herbert, who had an NFL-caliber facility at the University of Oregon, said the headquarters could help attract free agents and retain current players.

“It should be right up there with the best of the best. The Spanos family has invested a lot, and it is up to us as players to go out and deliver,” he said.

While Rams owner Stan Kroenke has spent billions to build palatial SoFi Stadium and the surrounding campus, his coaches and players still spend their weekdays working out of temporary trailers at the spartan training complex the team built on the campus of California Lutheran University in Thousand Oaks after its return from St Louis in 2016.

But the Rams finally might be on the move in a few seasons: Earlier this month, a Los Angeles city council member confirmed that Kroenke bought the defunct Woodland Hills Promenade mall for a reported $150 million. The team is expected to build a training complex on the site, although it hasn’t announced any plans or even confirmed Kroenke’s purchase of the property.

Spanos tried to downplay the reality that his team has made progress on a new facility before the defending Super Bowl champions.

“Listen, we have to do what we have to do, just like they do. It’s not a race to us for first or second. I don’t look at it that way,” he said.