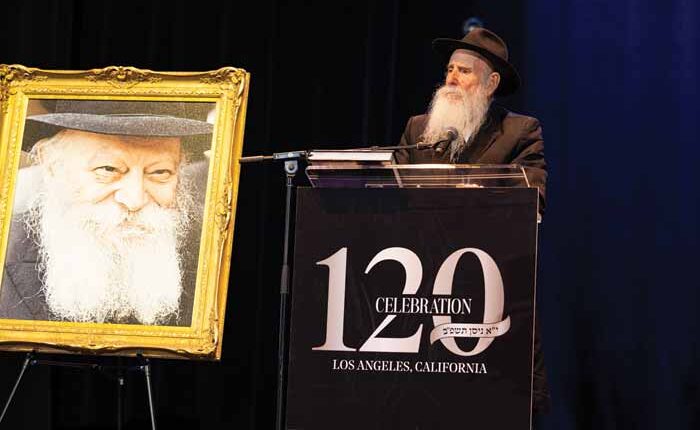 A few days before the start of Pesach, on April 11, supporters of Chabad West Coast came together at the Saban Theater in Beverly Hills for a community Farbrengen — or gathering — celebrating 120 years since the birth of the Rebbe.

Before a packed house of approximately 1,500 attendees, Rabbi YY Jacobson of Monsey, New York appeared as the keynote speaker; Rabbi Mendel Kalmenson, author of “Positivity Bias: Practical Lessons for Positive Living based on the life and teachers of the Lubavitcher Rebbe,” words offered; and Hasidic performer Eli Marcus sang a musical tribute to the Rebbe.

Approximately 1,500 people turned out in Beverly Hills to celebrate 120 years since the birth of Rabbi Menachem Mendel Schneerson, also known as “The Rebbe.” Photo by Levi Percia

In preparation for the holiday, organizers had brought boxes of handmade shmurah matzah into the lobby of the theater, and attendees were invited to take matzah and distribute it to the community. This was in accordance with “the Rebbe’s spirit of sharing the inspiration and turning it into action,” said Chaim Cuninwhose father, Rabbi Boruch Shlomo Cuninis the leader of Chabad West Coast.

“This is the first such event we’ve had since COVID,” Chaim Cunin said in a phone interview. “The last time we were at the Saban was before COVID when Tzemach Cunin died An indoor event of this kind was refreshing, and it was beautiful to see everybody coming together for such a special occasion. It was beautiful to see.”

the late Rabbi Menachem Mendel Schneerson, known by many simply as “The Rebbe,” was born on April 5, 1902. As the leader of the Chabad-Lubavitch movement, he was responsible for growing Chabad into one of the most influential movements in Judaism. According to Cunin, he wished that his birthday every year not be an occasion for giving him gifts but an opportunity to perform mitzvahs.

The 2022 AJC Project Interchange delegation of US mayors to Israel. Courtesy of the American Jewish Committee

Advocacy group American Jewish Committee (AJC) hosted a delegation of US mayors in Israel from March 27-April 2 as part of AJC Project Interchange.

“AJC has worked closely with mayors and municipal leaders for decades on issues of mutual concern. As on previous mayoral visits to Israel with AJC, this group learned about Israel and engaged in fruitful exchanges with their Israeli counterparts on approaches to common challenges,” AJC Chief Field Operations Officer Melanie Maron Pellwho accompanied the delegation, said.

This year, the delegation visited localities throughout Israel and discussed best practices for managing COVID-19, urban revitalization and electric transportation, according to AJC.

Project Interchange is a nonprofit educational institute of AJC. For over 40 years, the initiative has brought more than 6,000 influential figures to Israel. The mayoral mission aims to enhance US-Israel relations on the municipal level. This year’s delegation represented the second AJC Project Interchange group under the auspices of the Memorandum of Understanding between the United States Conference of Mayors and Israel, signed in 2019.

Two San Fernando Valley congregations — Temple Aliyah and Shomrei Torah Synagogue — participated in an interfaith event, celebrating how Passover, Ramadan and Easter all fell on the same dates this year. The confluence of holidays only happens every 33 years due to the different calendars.

Called “Holiday of Holidays,” the April 18 program was held at Ezzi Masjid, a mosque in Woodland Hills connected to the Dawoodi Bohras, a religious denomination within the Ismaili branch of Islam.

“There has been an interfaith alliance between our Jewish, Christian, and Muslim neighbors in the West Valley for many years,” Stein said in remarks. “The exchange of ideas, customs and theology has brought us closer as a community and is the basis for cooperation and goodwill.”

Stein, who conceived of the program, said it was “based on my understanding of a similar event originally held in Haifa, Israel.”