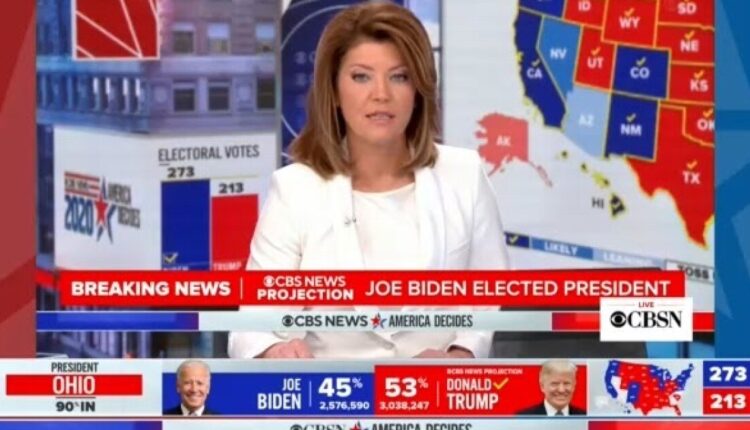 CBS News is overhauling its streaming news channel with a new name and a suite of programs presented by its notable anchors that tap into the division’s legacy.

The ViacomCBS entity announced today that the free, ad-supported channel known as CBSN since its launch in 2014 has become CBS News Streaming. It will also integrate the division’s broadcasting franchises into the channel – a shift in strategy since it previously relied heavily on a cadre of lesser-known anchors.

Neeraj Khemlani, president and co-head of CBS News and Stations, told the Times in an interview that the new moniker will signal to streaming viewers that they’ll see the same level of storytelling and coverage found in the network’s franchises as seen on “CBS Sunday Tomorrow” and “60 Minutes”.

Khemlani believes the move — along with the expansion of streaming news channels at CBS-owned local stations — will break down the barrier that has separated the broadcast and digital sides of the operation.

“You can’t underestimate the cultural impact when everyone internally now says they’re part of CBS News,” Khemlani said. “It also reduces external confusion about the brand. It’s about unlocking the power of CBS News to more audiences around the world.”

O’Donnell hosts “Person to Person,” a revival of the interview program with legendary CBS journalist Edward R. Murrow. King will host “CBS Reports,” a long-form news program that takes its name from the documentaries the network was known for during its heyday in the 1960s and 1970s.

The changes are unveiled as news outlets across the media landscape seek to ramp up their streaming efforts as more viewers gravitate away from traditional television.

WarnerMedia’s CNN has been on a hiring tour ahead of the launch of CNN+, which will make content produced by the channel available to consumers without a cable subscription. The company has poached Fox News veteran Chris Wallace and former NPR host Audie Cornish for the subscription service, which is due to launch this year.

NBC News has also added several of its established names — including Tom Llamas and Hallie Jackson — to its free-streaming channel, NBC News Now. Fox News has taken a different approach with Fox Nation, showing documentaries and lifestyle programming with its on-air talent and daily reruns of its prime-time shows.

They all have the same goal: to find a way to engage viewers who have decided to abandon cable and broadcast television for streaming platforms. The new channels could eventually become the primary way news departments reach their audiences.

CBS News Streaming will expand on the franchise established in CBS News’ nightly newscast and hit weekend programs. Here Comes the Sun, with CBS Sunday Morning correspondents Lee Cowan and Tracy Smith, will feature new and old segments from the program, which has the highest viewership of any morning show on television.

The streaming service will also expand “The Dish,” a popular food segment on CBS Saturday Morning, into a weekly half-hour series co-hosted by Michelle Miller, Jeff Glor and Dana Jacobson.

Miller will also be the host of “Eye on America,” a program based on a long-running evening news segment that delves into stories from around the country. Steve Hartman, whose emotional “On the Road” segments are a staple of CBS Evening News, also gets a weekly half-hour.

CBS Mornings co-host Tony Dokoupil will host The Uplift, based on a segment of the program that highlights uplifting stories about people overcoming obstacles in their lives.

CBS News Streaming will have its own live newscast at 7:00 p.m. Eastern Time, followed by the airing of one of its prime time shows, 60 Minutes and 48 Hours, or an episode of one of the new original series. The station will also have a nightly political show with CBS News Washington correspondents, including newly hired Robert Costa, who recently joined the network from the Washington Post.

The programs are available to users on-demand after they appear on a live stream that plays them on a schedule. They will also be available on CBSNews.com and Paramount+, the subscription streaming service operated by ViacomCBS.

Khemlani declined to comment on the contract status of King and O’Donnell, whose deals expire this year. Her future has been the subject of TV news industry speculation. Including them in an announcement for two high-profile shows suggests they’re likely to stay on the network.

“I will tell you that Gayle and Norah and Tony Dokoupil and presenters and reporters across the board are showing tremendous leadership in contributing to the service and they are the pace cars for the entire division,” Khemlani said. “We’re thrilled that we can draw on people of this caliber and not have to have separate teams down the line.”

CBS is also adding two more local streaming news channels, broadcast from its stations in Miami and Detroit, bringing the total to 13. The network offers service in Los Angeles from its affiliates KCBS and KCAL.

The services have expanded since George Cheeks, CBS president and chief executive, decided to merge the news division with the networks under Khemlani and Wendy McMahon, who share the title of president and co-chief.