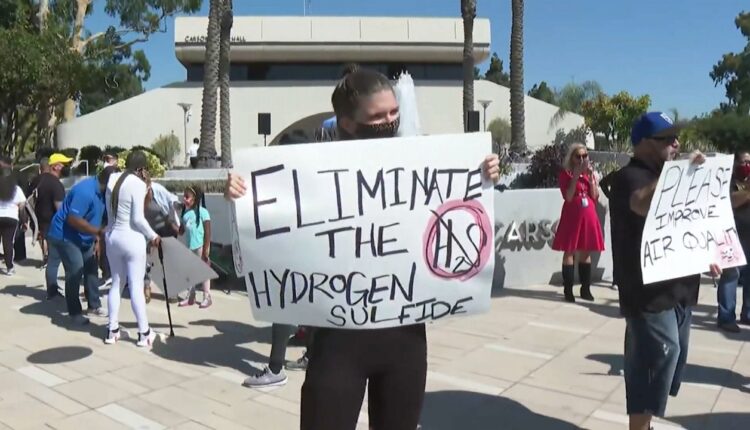 CARSON, Calif. (CNS) – With residents of the Carson area continuing to endure a noxious smell of rotting organic matter in the Dominguez Canal, the city declared the local emergency on Monday, calling on the Los Angeles County, state and White House to issue similar proclamations.

“Today the city decided to declare a local emergency on behalf of the residents of Carson,” said Mayor Lula Davis-Holmes.

“We also urge the county, Governor (Gavin) Newsom and President (Joe) Biden to also declare a state of emergency to provide access to additional resources for residents and business owners, including, but not limited to, cutting red tape to enable it allows the district to quickly implement the permanent solution of restoring the canal and environmental rehabilitation. “

Davis-Holmes was assisted by members of the city council in the local proclamation. A special session followed to address the persistent foul odor emitted by hydrogen sulfide gas, which has been described as similar to the odor of rotting eggs.

Thousands of residents from Carson, West Carson, and parts of Gardena, Torrance, Redondo Beach, Wilmington, and Long Beach have reported the smell. Some complained of headaches, sore eyes, nausea, and other ailments.

Carson’s move to declare a local emergency comes days after LA County announced “drastic reductions” in the amount of hydrogen sulfide gas released from the canal. Nevertheless, even low concentrations of the gas continue to cause nuisance for the surrounding communities.

The city said in a statement on Monday that a permanent solution could be to dredge the canal and turn it into “a city convenience rather than a nuisance.”

However, this would be a complicated, months-long process, according to Mark Pestrella, director of the district public works office.

He said great care had to be taken to avoid separate environmental problems caused by other chemicals released from the canal. If the canal had to be dredged, it would take about five acres of water to drain, which is about five rose bowls a foot deep.

In the short term, Pestrella said, Public Works are spraying Epoleon, a natural biodegradable spray that will soften the hydrogen sulfide odor by converting the gas into a by-product of salt that the county will remove in a separate process.

The city, meanwhile, is demanding that county, state, and federal regulators overseeing “in, near, or over the Dominguez Canal expedite any approval process associated with the immediate cleaning and restoration of canal waters, soils and banks under” connected are an emergency. “

The Dominguez Creek is technically under the jurisdiction of the county.

The LA County Board of Supervisors voted last Tuesday to step up support for residents of Carson and neighboring communities suffering from the stench. Supervisors Holly Mitchell and Janice Hahn jointly drafted a motion calling on the Department of Public Works and the County CEO to do whatever is necessary to provide rapid relief to residents, including direct distribution of HEPA air filters and filter units , issuing hotel vouchers and reimbursing cities for deliveries and hiring a third party to manage and reimburse aid supplies.

The county health department and Carson City Council had previously described the foul smell as a “public nuisance”.

The health department recommended last week that residents affected by the odor should avoid prolonged outdoor activities between 9:00 p.m. and 8:00 a.m. based on patterns observed in the aerial surveillance results and exposure to reduce strong odors.

The department also called for pets to be kept indoors and taken to the vet if they appear lethargic, have difficulty breathing, or vomit.

Schools in the area were also encouraged to exercise discretion in outdoor activities by students.

A group of Carson residents has sued a warehouse owner and tenant who they claim is partly responsible for the stench. The proposed class action lawsuit filed in the LA Superior Court said a fire broke out days before the initial odor nuisance complaint in a nearby warehouse with highly flammable ethanol-based hand sanitizer and that Art Naturals, the warehouse renter, remained unsure of conditions that caused the fire.