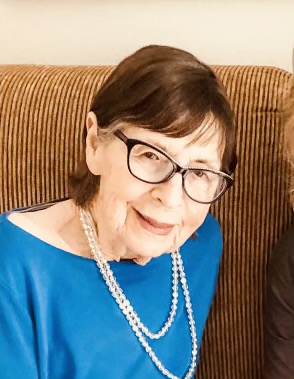 Carrie Eckert passed away on February 1, 2022 unexpectedly but peacefully from complications of a fall just two weeks prior to turning 97. Carrie was born in Waxahachie, Texas. She left home at the age of 16 and subsequently began working for the US Civil Service which took her first to Colorado then to Hawaii and finally to Santa Monica, CA where she met Bob Eckert. They were married six weeks after meeting in 1948. Carrie and Bob lived in Van Nuys where their first son, Bobby, was born, soon followed by Janet, and then Barry. In 1959, the family moved to Santa Barbara to a brand new house on the Mesa where Carrie would continue to live for the next 50 years. Bob and Carrie opened and operated T-Bird Liquor on the Mesa from 1958 until retirement in 1982. Carrie thrived on the Mesa, going to the beach for bodysurfing, riding her bike until the age of 80, walking Shoreline Park, and becoming first ” Mommy Eckert” to her children’s friends in the neighborhood and later “Grandma Carrie.”

Carrie’s complete and unabashed love was for her family, most especially her grandchildren and her most recent great-grandchildren. It was in their presence that her light shone the brightest. Carrie constantly called herself the luckiest person in the world that her entire family lives in Santa Barbara: “All 20 of us!” she would marvel. In 2009, several years after Bob passed away, Carrie moved to Valle Verde, her second home and family. Among her many friends and the staff, she was truly loved. Carrie’s zest for life, her energy, her sharp wit, and her ability to immediately make strangers her friends are the traits she was most admired and loved for.

Carrie was preceded in death by her husband, Bob. She is survived and loved forever by her children, Bob Eckert, Janet and Gary Gordon, Barry and Gail Eckert; her grandchildren Scott Gordon (Julie Stephenson), Kaycie Gordon (Joe Bolger), Kristine Hewes (Nick), Laura Glendinning (Erik); her great-grandchildren Sammy and Ben Gordon, Gray Bolger, Ella and Cora Hewes, Mia Glendinning and soon-to-be newest addition. Carrie is also survived by her dearest and most beloved friend, Jane Sieburg. The family would like to thank the staff at Valle Verde assisted living, Quail Lodge, for their love and devotion to our mom. They kept her safe and happy and we will be forever grateful. Gratitude and appreciation also goes to the compassionate and exceptional doctors and nurses at Cottage Hospital, most especially Tori and Helio.