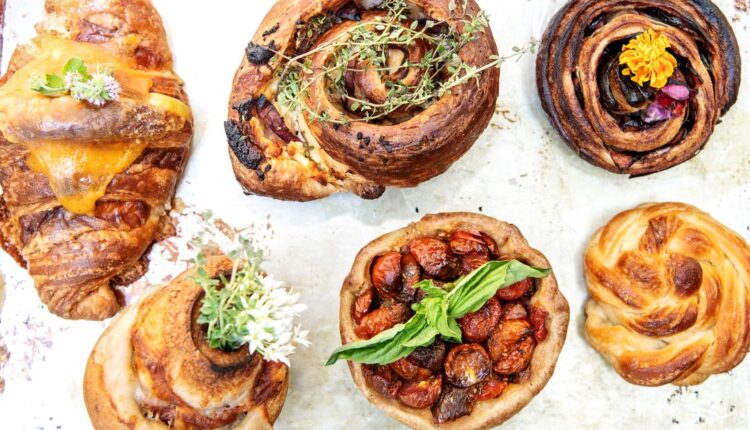 On Sunday morning, a drive on a winding mountain road and a turn to the parking lot of the Will Geer Theatricum Botanicum performance center will take you straight to Patrice Winter’s quaint Canyon Bakery. It’s the culmination of decades of homemade, wildly fermented baked goods, the transportation of muffins, bread, and cookies through the canyons and along the Pacific Coast Highway to shops and restaurants in Topanga and Malibu, and the long-standing belief that one day they’d be a shop front of hers would open own.

It took her 12 years to make that happen, and of course, she says, she was rehearsing in the kitchen all the time.

Now, near the theater’s bubbling fountain and a small slope filled with fresh herbs – found in Winters’ cakes, quiches, and other pastries – Canyon Bakery is open to the public. Once a week it becomes a quiet hangout for anyone looking for their naturally leavened bread, pizzas, peach and hazelnut croissants, and hand pies with fruits from the Santa Monica Farmers Market.

“It’s science in a way, but it contains love and emotion. It’s not just a scientific thing, and believe me – I can’t tell you anything about the science of baking, ”said Winter. “I didn’t do chemistry, but I’m intuitive; the dough speaks to me. “

She builds these doughs from heirlooms and locally grown grains that she grinds on site and turns them into fluffy whole-grain cinnamon buns, Shakespeare-shaped cookies (a nod to the regular theater performances), rosemary-scented boules, coconut-sugar florentines and bagels crusted with za’atar. The menu changes every week.

The yogi, fitness trainer, and tailor grew up loving cooking thanks to her mother, who started painting Christmas cookies out of a high chair in Lakewood. Winter and her brother then went on to stand on boxes of Coca-Cola to reach the kitchen counter. During the weekly family outings to a Jewish bakery, Winter first became enthusiastic about bread and sweets. When she moved to Los Angeles, she stumbled upon lavish hotel brunches – especially Biltmore’s, where the croissants and other pastries piled high on tables inspired her to focus on baked goods she could make herself. She did it for five decades.

She took a cross-country ride with a friend in the San Fernando Valley. Soon after, winter passed an entrance to Topanga Canyon at night. Fascinated, she came to visit again the next day and then moved there the following week. It wasn’t long before she established her half-century-old sourdough starter, which she named Lady Hawk.

In the early 1970s, after reading about wild fermentation, the baker picked up a few old grapes from the property she was renting – a sprawling estate founded by LA dance hall magnate Fred Solomon – and planted them in a glass of water. The wild yeast, which occurs naturally on the skin of the grapes, forms its starter, which is now used in almost all bakery products.

In 2008, after decades, one of the fitness students, Ellen Geer – the current artistic director – suggested that she use an empty building on the premises for a bakery. The plan was always to open Canyon Bakery to the public, but when Winter thought about business models, she was blown away by her appearances at the farmers’ market and wholesale stores whose deliveries were made by her husband Dave, known in the community as “the muffin”. man. “(He now serves as an accountant and greeter: he tracks Venmo payments, notes orders, greets guests and keeps track of the inventory.)

In 2020, after years of waiting and planning, Winter finally opened Canyon Bakery to the public – five days before LA County’s COVID-19 shutdown in March. 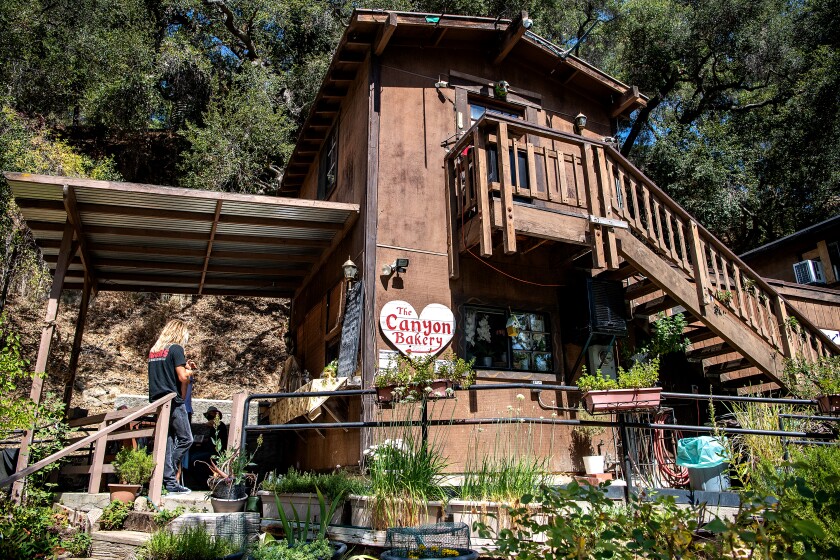 A customer is waiting for his order at Canyon Bakery.

She switched to a pickup-only model and called on Instagram that the store would stay open and that anyone could text her directly to get menus or place an order. Winter said she was sending menus to 300 to 400 people a week. (Prices on their menu range from $ 4 to $ 25.)

Since then, her bakery has continued to grow in popularity – it often sells out until 11 a.m. on Sundays – and Winter plans to expand. She adds an espresso machine and wants to remodel the small kitchen to incorporate a shop that displays a baker’s shelf stocked with the day’s fresh pastries and bread, while a cooling section stocks her hibiscus iced teas and other beverages. She envisions shelves of pantry items and jams of her own creation, as well as products from other local manufacturers, with a focus on Topanga Canyon.

After all, Canyon Bakery is as much about Topanga and its community as it is about rustic baked goods. In a way, it’s a love letter to what Winter believes, a very special place that she fell in love with more than 50 years ago. “I said to myself, ‘I’m going to move up there,'” she recalls, “and within a week I moved and never left.”