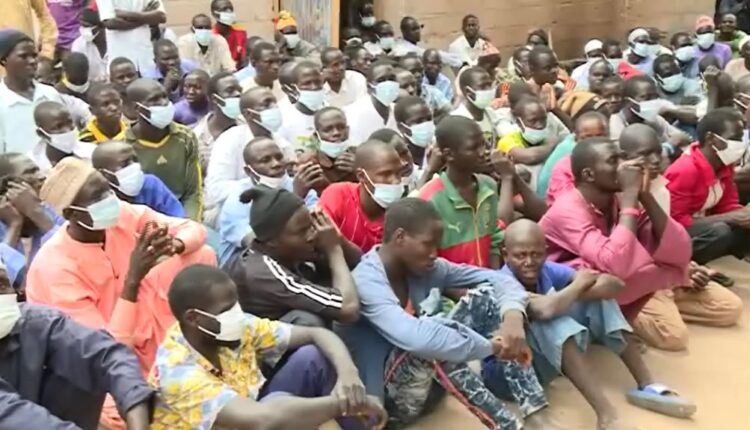 YAOUNDÉ – Authorities in Cameroon say there are seeing an increase in the number of Boko Haram militants surrendering at a disarmament center on the northern border with Nigeria. Officials say there have been hundreds of defections from the terrorist group since May, when Abubakar Shekau, leader of the Islamist group, was declared killed.

Cameroonian authorities said they are overwhelmed by the number of militants fleeing the extremist group Boko Haram. The National Committee for Disarmament, Demobilization and Reintegration, or the DDR, a center set up by the government, hosts about 750 former militants in Meri, a town on the northern border with Nigeria.

Dieudonne Nkollo Zanga is one of the administrators of the DDR center in Meri. He said the center received more than 155 militants within the past seven days and a total of about 450 militants have arrived at the center since May.

Zanga said the government of Cameroon has provided space in Meme, another northern town not far from Nigeria, for the construction of a center that can host 1,500 former Boko Haram fighters. He said funds to construct the DDR center are available and construction work will begin soon.

DDR officials say a majority of the 155 militants who arrived this week in Meri, Cameroon, July 29, 2021, are wives of the fighters and their children. (Moki Edwin Kindzeka/VOA)

Zanga said the center in Meri is small and can’t accommodate the increasing number of Boko Haram militants abandoning the group. DDR officials say a majority of the 155 militants who arrived this week are wives of the fighters and their children. Forty of the 57 men are former Boko Haram fighters.

Francis Fai Yengo is director of the government’s DDR center. He told reporters Monday that the government has taken adequate measures to provide for the needs of the former fighters. Speaking at a news conference in Yaounde, Yengo says Cameroon’s president, Paul Biya, has instructed officials to pardon all fighters who surrender and disarm.

He said a majority of the fighters who escape from the bush to join the DDR center need to detox from substance use. He said it is very difficult to communicate with the former Boko Haram combatants when the fighters are still struggling with substance use disorders. He said the former fighters confess to their crimes, including killing and should be admitted in the deradicalization programs as soon as possible.

After Wiping Out $6.7 Billion in Medical Debt, This…

On the Wisconsin-Illinois Border: Clinics in Neighboring…

Yengo did not say how many weapons were collected from the fighters. However, Cameroon’s military said the militants handed themselves to troops of the Multinational Joint Task Force of the Lake Chad Basin that is fighting the jihadist group. The task force is made up of troops from Niger, Cameroon, Chad and Nigeria.

Wives of Boko Haram fighters and their children are seen at the DDR Center in Meri, Cameroon, July 29, 2021. (Moki Edwin Kindzeka/VOA)

Cameroon said the troops transported the militants who surrendered from border localities to the DDR center. A majority of the militants surrendered around Nigeria’s Sambisa Forest, an area bordering Cameroon and a stronghold for Boko Haram.

Saibou Issa is a conflict resolution specialist at the University of Maroua in Cameroon. He said many militants have been defecting following the death of Abubakar Shekau, the leader of Boko Haram, in May.

Issa said attacks by the joint task force in formerly Boko Haram-controlled areas and his fighters have made Shekau’s militants weaker.

“With the demise of Shekau, they [former fighters] were obliged to go in for predatory attacks giving the impression that they were just going in for survival attacks to make money around Lake Chad and be able to, let’s say, be independent at least concerning their daily lives,” he said.

Issa said rival jihadist groups that disagree with Shekau also scare Boko Haram militants who fail to join the rival groups. He said the fighters who defect are either returning to their communities, handing themselves to the military or regrouping to strategize and form a stronger jihadist group.

In May, a video from Bakura Modu, the presumed successor of Shekau, appeared to confirm that the Boko Haram leader was killed by rival jihadist groups in the Sambisa Forest in April.

Although founded in 2002, Boko Haram gained more prominence after attacks against authorities in northeastern Nigeria in 2009. And in 2014, it spread into neighboring Cameroon, Chad and Niger. Over 30,000 people been killed and two million have been displaced due to conflict.

How to watch the Women’s 400m Hurdles – NBC Los Angeles

After Wiping Out $6.7 Billion in Medical Debt, This Nonprofit Is Just Getting Started

On the Wisconsin-Illinois Border: Clinics in Neighboring States Team Up on Abortion…