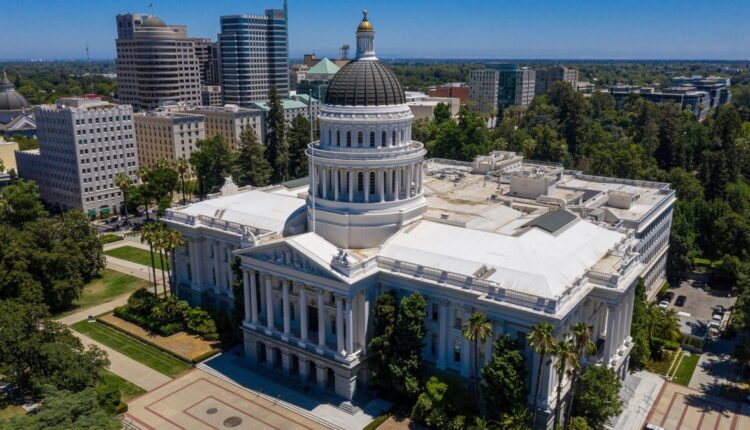 New political maps have upended the California Legislature this year by prodding more than two-dozen state lawmakers into early retirement or career changes, while others are forced into unfamiliar new districts ahead of the November election.

Democrats still vastly outnumber Republicans in both legislative chambers. But all the jockeying endangered the power base of Assembly Speaker Anthony Rendon and forced Senate President Pro Tempore Toni Atkins to intervene to avoid head-to-head June 7 primary battles between her Democratic members.

In one case, two San Francisco Bay Area assemblymen duked it out in a mock pillow fight after they were drawn into the same new district. But Evan Low ultimately said he would move to a neighboring district to avoid the fight with Marc Berman.

Much of the fallout stems from the new jigsaw puzzle legislative maps required each decade after the national census recalculates the state’s population. California’s political maps are drawn by a randomly selected Citizens Redistricting Commission whose members aren’t allowed to consider if new district lines imperil sitting lawmakers.

The number of seats in flux hasn’t been seen since the last redistricting a decade ago, said legislative historian Alex Vassar of the California State Library. It’s also unusual, he said, because just seven lawmakers, all senators, are departing because of term limits compared to 17 legislators in 2016.

Some of the departures include Democratic members of the Assembly who were elected with Rendon during the last redistricting year, in 2012. Like him, they all were eligible to serve through 2024.

Among them are Assembly Speaker Pro Tempore Kevin Mullin and Rudy Salas, both running for Congress; Lorena Gonzalez, who left midterm to lead the California Labor Federation; Ed Chau, appointed to a Los Angeles County judgeship; and Jim Frazier, who also resigned midterm.

In addition, class of 2012 Democratic members Richard Bloom, Tom Daly, Bill Quirk and Mark Stone opted not to seek reelection, with Stone saying it would be “inherently unfair” to voters if he ran in a new district for just two years.

“Redistricting creates a lot of opportunities and a lot of churn,” said Rob Pyers, research director of the nonpartisan California Target Book, which closely tracks redistricting.

A typical election cycle might see fewer than a half-dozen incumbents not seek reelection for various reasons, he said.

This time there are 26 races with no incumbent in the 80-member Assembly, while 10 of the 20 Senate seats on the November ballot will have no incumbent. Half of the 40-member Senate is up for election every two years, while all Assembly members run every two years.

Rendon is among those who see advantages in the upheaval, saying the changes “add new energy to our house.”

What some are calling this the Legislature’s “Great Resignation,” Susannah Delano, executive director of Close the Gap sees it as the “Great Opportunity” to elect more women.

About 80% of departing lawmakers are men, making this year “the start of California’s best opportunity yet to elect a legislature that raises the national bar on equity” said Delano, whose organization promotes progressive female legislative candidates. Before this year’s early departures, 39 of California’s 120 legislators were women.

Across the Capitol Rotunda, Atkins hasn’t faced the same mid-term defections. She helped de-escalate one intraparty battle in the Central Valley when Sen. Melissa Hurtado agreed to relocate into the new 16th Senate District rather than face fellow Democratic Sen. Anna Caballero in the 14th Senate District.

That pits Hurtado, with Atkins’ pledge of support from the Senate Democratic Caucus, against former Democratic Assemblywoman Nicole Parra. And Sen. Connie Leyva opted not to seek reelection when she was lumped into the same Senate district with fellow Democrat Sen. Susan Rubio.

On the Republican side, Sen. Andreas Borgeas dropped his reelection bid rather than play musical chairs with Sen. Shannon Grove for the same seat.

Several members of the Assembly also opted not to seek reelection rather than run against fellow Democrats after they were drawn into the same legislative districts. But in the San Francisco Bay Area former Assemblyman Kansen Chu is trying to unseat incumbent freshman and fellow Democrat Alex Lee, the Legislature’s youngest lawmaker in decades.

On the Republican side, Assemblymen Thurston Smith and Tom Lackey are running for the same seat, as are Randy Voepel and former GOP leader Marie Waldron. And two incumbents from opposing parties — Democrat Cottie Petrie-Norris and Republican Steve Choi — are running against each other in a Southern California district.

Former Assembly GOP Leader Chad Mayes, now the Legislature’s only independent; Republican Assemblyman Jordan Cunningham; and Democratic Assemblyman Patrick O’Donnell all are retiring even though each could serve at least four more years.