C. Frenz is more than just a nightclub, it is an oasis for many in the LBGTQIA + community of the Valley – Daily Sundial 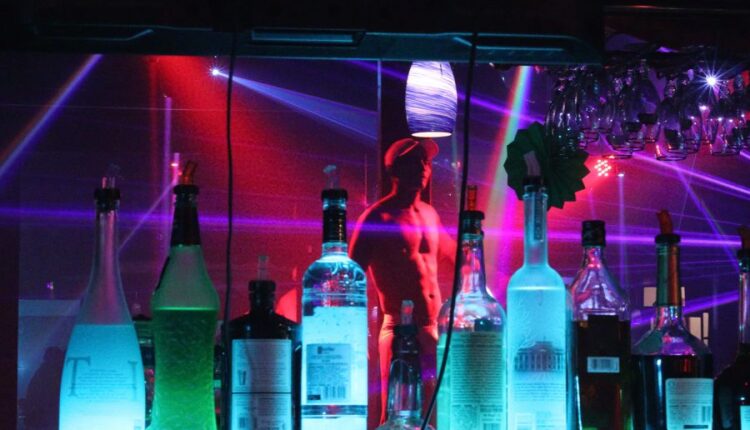 The neon beams break from the smoke-curtained dance floor as reggaeton music fills the room. The musky smell of the fog machine fills your nose when you hear the clink of billiards in the next room.

Outside, laughter can be heard from a group of three friends. The soft glow of a small flame illuminates their features as they light the tips of their cigarettes.

The C. Frenz Nightclub brings the local LGBTQIA + community together and creates a hometown – the “Cheers” of the San Fernando Valley for the rainbow community. Safe spaces for socializing are still a rare commodity for the community.

Three main places to socialize in an LGBTQIA + setting are information centers, bars, and nightclubs. For the rainbow community of the San Fernando Valley, C. Frenz is the closest nightclub outside of West Hollywood.

The lead bartender for C Frenz, Memo, right, makes a vodka drink for a guest at C. Frenz in the Reseda neighborhood of Los Angeles, California on October 2, 2021. (Kaitlyn Lavo)

There are several queer bars in West Hollywood and only two in the Valley. C. Frenz and Bullet Bar are the two local gay bars. Bullet is aimed at a male-dominated clientele, while C. Frenz caters to people from all walks of life. For CSUN students, a drive to West Hollywood can take over 30 minutes, while C. Frenz is a short 11-minute drive away.

As the pandemic struck the nation, most of the LGBTQIA + social scene was withdrawn from the community. C. Frenz closed for over a year when the state announced the stay at home order, as did other non-essential businesses. Without community support, the nightclub could have perished while it was closed.

C. Frenz ‘owner Stephen Miele has owned the house since 2005. From financial difficulties of staying open to horrific vandalism, C. Frenz has taken many hard blows over the course of the pandemic.
“As a bar owner of almost 30 years, I have seen and survived a lot. I encountered many obstacles: police raids in the 1990s, the AIDS epidemic, harassment by the government, but we persevered and were up to the situation, ”said Miele. “I’m thrilled with the progress we’ve made in the recent past – but I ask the younger generation not to be complacent because what we’ve gained can easily be lost.”

Miele said he invested a lot of money and personal time keeping the nightclub up and running, knowing how important it is to the local queer community.

“We blew money to death – and earned nothing,” said Miele. “I paid the rent for the building from March to September, but in the end I just ran out of money.”

Along with the financial hardship, the club was destroyed and robbed in November 2020.

“The thieves took advantage of a bar that had been closed for months and plowed the fence with a truck back to the back door, broke in and rioted. They loaded almost everything onto the truck that wasn’t nailed down, and a lot too, ”explains Miele.

The perpetrators stole the club’s inventory of spirits, DJ and sound equipment, other technology such as computers and cameras, and the wall-mounted jukebox. In addition to the robbery, they also destroyed the dart machines, the pool tables, and all they left behind were the gaping holes in the walls.

“I’ve been robbed before, but I’ve never seen such blatant vandalism,” said Miele. “I thought that was the end.”
It’s not uncommon for LGBTQIA + locations to receive unwanted visitors, but C. Frenz had to see something as drastic as the events that took place during the fall season of the pandemic.

“I had a meeting with the C. Frenz team to decide about the future or the demise of another gay bar. We agreed that we will all work hard to keep the club going, ”said Miele. 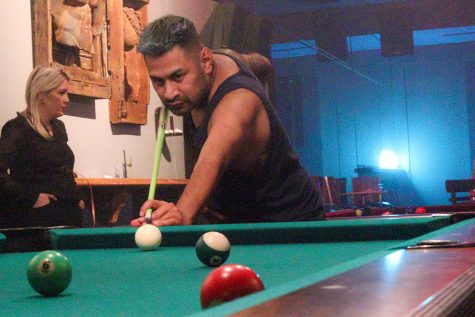 Danny Aguilar plays pool with his friends at C. Frenz Nightclub in the Reseda neighborhood of Los Angeles, California, on October 2, 2021. (Kaitlyn Lavo)

With the help of a GoFundMe campaign, a large fundraiser, and a small business loan, C. Frenz continues to provide a safe place for the gay community.

“It was the fantastic and generous LGBT Valley community that was there for us and for which we will be eternally grateful,” said Miele.
The nightclub, which has had different owners and names since the 1970s, is referred to by some as Incognito or Bananas. For those who want a casual, fun evening but don’t want to let others know where they are, say they are “C. Frenz “- a clever name for members of the community who still want to remain inconspicuous.

Bartender Matt Reyes has worked at C. Frenz Nightclub for the past two years and is a member of the community himself.

“I wasn’t out in public, so it was a place where I could interact with others and learn without coming out of myself,” Reyes said.
Reyes, like many other young queers in the community, relies on places like C. Frenz to provide safe places to learn about yourself and the community – all of which have been taken away in the wake of the pandemic.

“Without her, there was no place where we could comfortably be ourselves,” said Reyes.

Many of them don’t just come to C. Frenz for dating. In fact, it is a place where lifelong friendships are forged. During the busy nights you will see people from all walks of life and ages sitting together. Some are there to just learn how to feel good about being yourself. You will find this comfort in the conversations that are held over a drink or a cigarette on the painted rainbow fences on the terrace of the nightclub.

Two women met on their first date at C. Frenz’s. AJ, who refused to give his last name, an outgoing biker, walked into the bar and ordered a shot patron. She put her black helmet on the wood and the red upholstered bar stool next to her. Her excitement and nervousness were evident in the accelerated pace in her voice and the way she played with her drink in hand as she described the feeling of being back in an LGBTQIA + community setting. This is their first date after their last relationship, which lasted 10 years.

We sat and talked while she waited for her date to arrive. After sitting and chatting a little about life as a nearly 50-year-old lesbian, we exchanged our contact details. She knew I was writing an article and wanted to stay informed. We joked that we should plan a double date for ourselves and our partners on a second date. Just a simple moment shows the importance of places like C. Frenz in the LGBTQIA + community.

AJ’s date, Luisa, arrived in a bright red hoodie. Her long, dark hair was half pinned up, showing her natural beauty: her almond brown eyes were gently framed with a touch of mascara, and her pink lips seemed covered with only a layer of lipstick. The two ordered drinks and seemed to get along well over a game of pool.

Before I left, I said goodbye to my new friend. This sparked a conversation between the three lesbians in the bar on a Monday night in the middle of a pandemic.

They compared their experience at C. Frenz to their nights in West Hollywood. Luisa, a regular at C. Frenz, said: “I like this bar because [West Hollywood] is always overcrowded and here you know that everyone is part of the community. Lots of straight couples go too [West Hollywood]. Here you tend to meet like-minded people. “

West Hollywood may be a huge hub for LGBTQIA +, but it lacks the connection-based social life that small queer businesses like C. Frenz naturally offer. The community would still go to bars with no dance floors – like C. Frenz – to find others with a shared experience.

Melba Martinez is another regular customer at C. Frenz who campaigns for blacks, indigenous people and people of color in the LGBTQIA + community.

“We have to support our local gay bar,” said Martinez. “At the end of the day there is not enough space to relax and feel like you are not being attacked by the rest of the world.”

While the nightclub was closing, Martinez hosted a virtual dance party called “Gigalo” to spread the word about fat phobia in the community.

“People were so concerned about the weight gain during the pandemic, we needed something fun to remind ourselves of the importance of loving our bodies,” Martinez explained.

Even though the gay nightclub scene seemed to be stopping with the rise in COVID-19 cases, Zoom became the new party platform.

Having safe spaces like C. Frenz is an important part of queer socialization as it’s an integral part of many people’s journey to self-discovery and acceptance. This year shows that even a pandemic can’t stop the community from celebrating life and dancing together, even if they’re miles apart in their own living room.

One finds home in the community. With the reopening of C. Frenz, the LGBTQIA + members of the San Fernando Valley find themselves back in their cozy corner of the rainbow night.