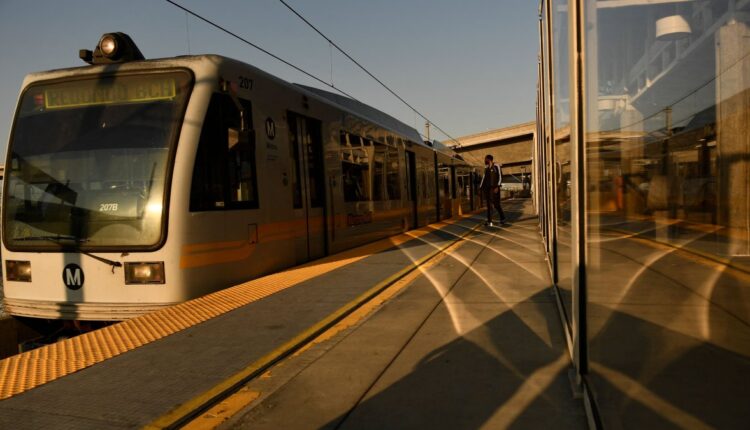 Metro officials Wednesday announced “substantial completion” of the bulk of the long-awaited Crenshaw/LAX light rail line connecting the Expo (E) Line in the West Adams area with the Green (C) Line near Los Angeles International Airport, with a portion of the route expected to open to passengers by late summer.

According to Metro, work is substantially complete on two sections of the line, essentially stretching from the Aviation/LAX Green Line station near the airport to Leimert Park. The transit agency will now begin a five- to six-month testing period on the line, with opening planned for late summer. An exact opening date has not been announced.

“The Crenshaw/LAX Line is integral to LA’s transportation future, and today’s milestone is proof of our extraordinary progress,” Mayor Eric Garcetti said in a statement. “We’ve promised Angelenos a state-of-the-art transit system in South LA for years, and today, we want to thank our residents and businesses for their persistence and support — and proudly share that in just a few months, we’ll open up a new train that will ease congestion, improve public health and connect their communities with the rest of our rapidly expanding transit network.”

The 8.5-mile transit line was originally planned for completion by 2020, but construction issues forced delays in the project, which was further complicated by the COVID-19 pandemic. Metro initially delayed the roughly $2 billion project’s opening until early 2021, then pushed it back until 2022.

When Metro completes its testing process on the substantially complete portions of the line, it will open initially only between the new Westchester/Veterans station near Manchester and Florence avenues and a new station near Leimert Park.

Trains will not begin running on the southern stretch between the Westchester/Veterans station and the Aviation/LAX station until late 2023, when work is completed on an Airport Metro Connector station platform for a future people-mover that will carry passengers to LAX terminals. Until that happens, buses will shuttle passengers along the southern portion of the rail line’s route.

Late 2023 is also the projected timeline for opening the final northern portion of the line, between Leimert Park and the Expo/Crenshaw station, connecting to the Metro Expo (E) Line.

The Crenshaw/LAX line is seen as a critical element in providing alternative transportation to the airport. It is also expected to help relieve traffic on game days at SoFi Stadium in Inglewood. The rail line does not stop at the stadium, but Inglewood is pushing for construction of a roughly 1.8-mile people-mover system that will link the stadium with the nearest rail station.

Metro officials noted Wednesday that the agency has worked to mitigate the impacts of the drawn-out construction project on local businesses, doling out more than $20.1 million to more than 230 “mom and pop” businesses since the work began in 2014.