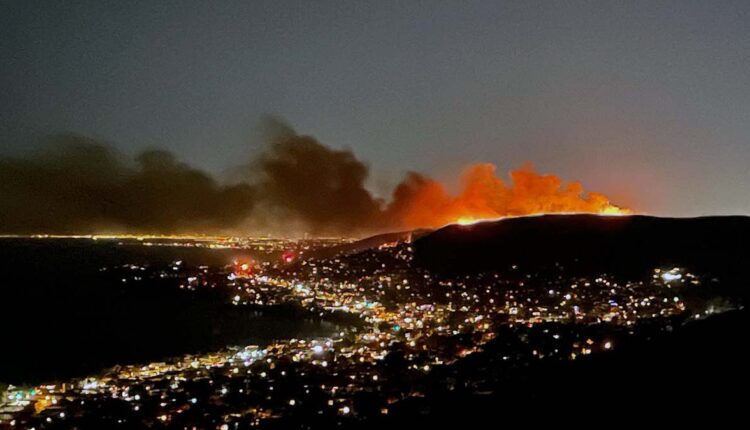 A brush fire pushed by strong winds forced evacuations early Thursday in coastal Orange County communities, but firefighters have protected homes as flames appear to be moving into open space.

The fire, estimated at about 145 acres, was reported around 4 am on a hillside above Emerald Bay. Containment was estimated at 5 percent. Acreage was estimated at 10 acres earlier Thursday, but those figures often change with improved mapping.

Flames and smoke could be seen at dawn from Long Beach and other parts of Southern California with an eerie orange glow over the coast.

An evacuation order was issued for Irvine Cove and Emerald Bay. An evacuation warning was in effect for North Laguna.

No homes were damaged, thanks to firefighters on the ground and a barrage of overnight runs from water-dropping aircraft. Orange County fire officials said they are optimistic that the fire will burn away from the area, allowing firefighters to hold flames along a ridge line away from neighborhoods.

Fire retardant will be dropped along the ridge line to halt the fire’s spread.

“We met it with a very robust response,” said Orange County Fire Authority Chief Brian Fennessy. “If we ask you to evacuate, please evacuate.”

Emerald Bay is an unincorporated area of ​​Orange County. The fire was pushed north by wind along the northern edge of a residential area.

“We got lucky in that regard,” Fennessy said. “I’m pretty confident right now, as long as the weather cooperates.

“The bulk of the fire is away from the structures.”

Spot fires were reported due to wind-strewn embers landing in dry brush.

Fennessy said at one point there was a fire engine in front of almost every home in the Emerald Bay area. There are no other major brush fires currently burning in the region.

The last time the area burned was in 1993, when hundreds of homes burned. At the time it was one of the most damaging fires on record in California. Fifteen of the state’s 20 most-damaging fires have burned within the last seven years.

After viewing the area, Fennessy complimented residents on the defensible space he saw throughout the neighborhood. Creating defensive space involves removing brush, branches or anything else that might allow flames to spread from brush to a house. The defensive space gives firefighters room to defend property from wildfires.

“They’ve got great defensive space,” Fennessy said. “They’ve done what we asked them to do.”

Smoke rises from the burned out ruins of homes along Skyline Boulevard in Laguna Beach in October 1993 after the wildfire hit the area. (Photo credit should read VINCE BUCCI/AFP via Getty Images)

Details about how Thursday’s fire started were not immediately available

An evacuation center was opened at Laguna Beach Community and Susi Q Center, and at the Los Olivos Community Center in Irvine.

Pacific Coast Highway was shut down in Laguna Beach from Ledroit Street to Newport Beach at Reef Point Drive.

All classes in the Laguna Beach Unified School District were canceled.

Strong Santa Ana winds, notorious for fanning brush fire flames, are in the Thursday forecast. A high wind warning was issued for parts of Southern California, including coastal Orange County.

Above-normal temperatures are in the forecast through Super Bowl weekend.

The winter heat follows a dry January, which countered the benefits from days of drenching storms in December. Most of Southern California, including all of Orange County, remains in moderate drought — an improvement from conditions at the start of the water year in October when the region was in severe and exceptional drought.

“We’re in for a good couple days of tough weather,” Fennessy said. “We see green on the hillsides, and it lulls us into a sense of complacency.”

Heat Advisory In Effect Until Sunday Night In Santa Monica