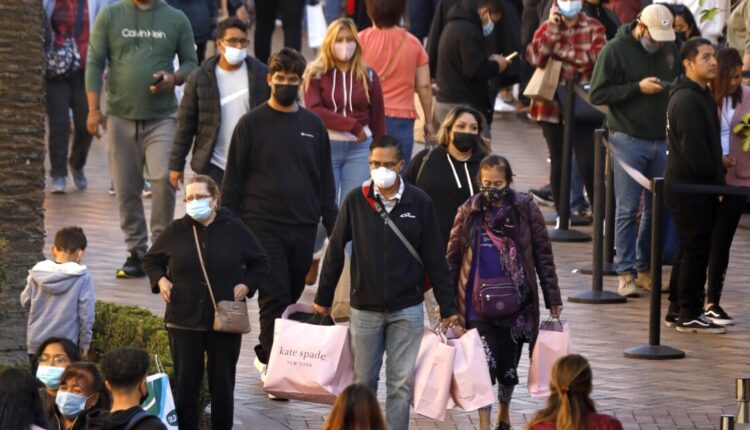 Ashton Caudillo and his father made their way to Westfield Santa Anita in Arcadia early Friday morning looking for a hard-to-find PlayStation 5 long before the mall opened at 7 a.m. What they found surprised them: only a handful of other buyers.

The 20-year-old’s father, Lawrence, has a vivid memory of the Black Friday past when hordes of people made the experience less than pleasant, so he didn’t complain.

“Black Friday used to be like Disneyland, waiting 45 minutes in line to spend money. I’d rather shoot myself in the foot than do that. So that’s nice, ”said the older caudillo with a smile. “I love it when there aren’t a lot of people.”

In the most consumer-friendly nation on earth, Black Friday in the US has long been viewed as the ultimate mirror that reflects everything that is good, bad and so about the world’s largest economy.

This year the message seems to be: Black Friday is no longer what it used to be. A historic shift to selling online, the ongoing pandemic, and the uncertainty surrounding a protracted supply chain crisis are changing the way Americans shop.

Around Los Angeles County, pedestrian traffic in malls and stores that long prepared for the Black Friday consumer attack appeared to be relatively slow for the biggest shopping day of the year.

At Baldwin Hills Crenshaw Plaza, an hour before it opened at 10 a.m., there were fewer than 15 people in line, and rows of the two-story parking lot were empty when the doors swung open. The crowds were also lower than usual on the early Friday morning outside the JCPenney at Glendale Galleria, a major Black Friday destination, and at the Empire Center shopping mall in Burbank.

“We are quite frankly stunned to see such a low turnout. We definitely expected a lot more people to be here this early, ”said Elin Markarian, 18, who sat down with two friends to wait four hours for the mall’s Best Buy in Burbank before it opened.

They ended up second in a line of fewer than 100 people, barely enough to walk around the corner of the store.

In Arcadia, business in Westfield picked up after opening hours, but it wasn’t the experience shopping center workers expected. That was a welcome surprise for Hot Topic sales rep Michele Uribe, who said the day felt “like a normal mall day.”

“I work in a grocery store and I am just past our busiest day of the year,” she said. “That’s a little break from the crowd.”

The slowdown was not entirely unexpected.

While the National Retail Federation predicts total Christmas retail sales will grow between 8.5% and 10.5% over the same period last year – enough to potentially break all records – the numbers represent sales in the two full Months of November and December.

This reflects the wider window for top-notch Christmas shopping that has popped up since the pandemic. Traditionally, seasonal shopping starts in earnest on Black Friday, but with the closure of COVID-19 stores last year and retailers who earlier launched online bargains, that rush is now starting weeks earlier.

Online shopping also continues to suck people out of the stores. According to Adobe Analytics, Internet sales are expected to increase 10% year over year to a record $ 207 billion in November and December

The shopping experience in the stores was also affected this year by bottlenecks in the supply chain, which have led to goods bottlenecks and many goods are out of stock. And the day’s biggest draw – discounts – were largely disappointing as rising prices, driven by inflation, did limited deals at a 30-year high.

Meanwhile, newly empowered workers have forced wage increases, but many retail positions remain unfilled. And a string of heists in high-end stores in Northern and Southern California has made retail workers nervous.

Still, shoppers waiting for their doors to open early Friday were happy to be behind their computers.

“It’s kind of like a return to normal for us,” said Christina Perez, who was queuing outside Target at West Valley Mall in Tracy, San Joaquin County. At 6:45 am, around 40 people were waiting for the store to open at 7:00 am. “We haven’t made it in the last two years,” said Perez.

She wasn’t sure what she was going to buy and she just wanted to be out with her family. Perez said she contracted COVID-19 twice and her husband also contracted the virus. Now fully recovered and vaccinated, the couple were ready to hit the road again.

“We just love the interaction,” she said of in-person shopping.

In front of Best Buy, Arturo Zaragoza, 19, was sitting on the curb at around 4:45 a.m. halfway through about 30 people. His goal: a PlayStation 5 for his little brother and a MacBook for him.

Zaragoza wasn’t sure what the exact deal would be for both items, but said he plans to “buy it anyway”.

“It’s about the experience. The experience of standing in line, ”he said with a laugh. “There is something to be done, I guess.”

Zaragoza said he thinks Best Buy’s decision to close Thanksgiving Day along with some other big retailers could actually cause less traffic on Friday as people may not be ready to wake up early after a holiday night out to eat and drink to browse the aisles.

Supply chain issues are expected to affect the shopping experience on Friday and for the rest of the year, although there are signs that the bottleneck in international trade is gradually easing. A full return to normality is not expected until next year, when the current traffic jam has been cleared and the factories in China are fully utilized again.

“I think this will be the first year with a serious backlog,” said Luis Lainez, manager of a T-Mobile store at the West Hollywood Gateway.

Large retailers like Walmart and Target report being well stocked for Black Friday and the rest of the shopping season, but smaller retailers without the weight of chartering entire ocean freighters don’t do as well.

Retail advisor Britt Beemer, whose company conducts consumer surveys, believes “it will be a big shock” when shoppers can’t find so many goods out of stock and fears that young consumers who are used to getting what they want online will get what they want want to really hurt stores.

“The under 30-year-old does not forgive at all. 45 percent said they would go on social media and tell all their friends not to shop at this store, ”said Beemer, founder and chairman of America’s Research Group.

Of course, the shortage of supply is not just an inpatient disappointment. Online news out of stock has increased this month, up 261% compared to November 2019, according to Adobe.

Another major obstacle for retailers and shoppers: a dwindling number of people willing to work in an industry where standing on their feet for long periods and dealing with often quick-tempered customers are a given – an experience that comes on on Black Friday 10 was increased.

The Glendale Galleria opened at 9 a.m. on Friday, two hours later than last year, at least partially, management said due to a labor shortage.

The pandemic caused many older workers who saw their portfolios thicker in the stock market to retire earlier than planned. Others with a new perspective on life and work are leaving jobs that were too demanding as the millions of workers laid off en masse last year have adapted to a changing economy.

“People have found different ways to survive and that includes relying on other family members, cutting costs drastically, working in the gig economy, and finding vacancies here and there,” said Kent Wong. Director of the UCLA Labor Center. “This means that workers can be a little more picky about the jobs they want to take on.”