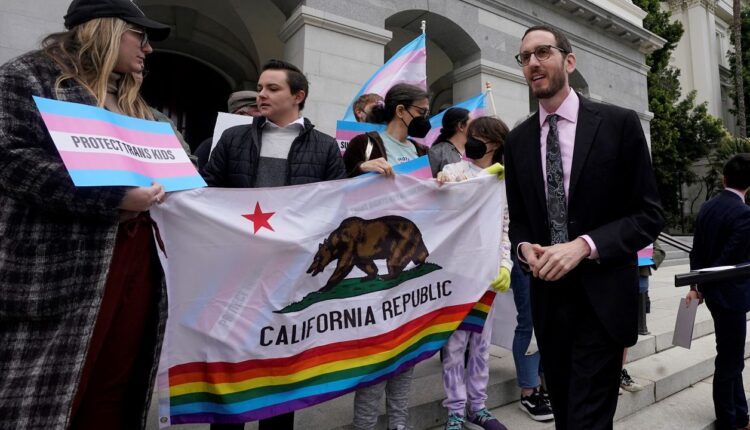 SACRAMENTO, Calif. (AP) — California could provide legal refuge to displaced transgender youth and their families under a proposal announced Thursday that joins a growing list of initiatives from the nation’s most populous state aimed at counterbalancing actions in Texas and other conservative places.

Democratic state lawmakers said they will introduce legislation to offer California as a safe haven for parents in other states who risk having their transgender children taken away or from being criminally prosecuted for supporting their children’s access to gender-affirming procedures and other health care.

The measure is a response to moves in several Republican-dominated states and particularly Texas, where Gov. Greg Abbott has directed state agencies to consider removing transgender children from their families and placing them in foster care. A Texas judge last week temporarily blocked that effort, although the state is appealing.

California Democratic State Sen. Scott Wiener said his bill would ensure that “California is a place of refuge for transgender children and their parents as a wave of criminalization sweeps through Texas and other states.”

“They have a safe place to go if they’re threatened with prosecution,” he added. “California will not be a party to this new wave of deadly LGBTQ criminalization.”

Jonathan Keller, president of the conservative California Family Council, responded to the proposal by citing the story of a woman who said last week that her 16-year-old daughter killed herself while receiving gender-affirming treatment against her mother’s wishes.

The mother spoke during a forum by The Heritage Foundation, a conservative Washington, DC-based think tank, entitled Protecting Our Children: How Radical Gender Ideology is Taking Over Public Schools & Harming Kids.

“California should not be complicit in the sterilization and permanent disfigurement of American’s children,” Keller said.

The bill to provide refuge to transgender youth and their families is the latest effort by California officials to counter moves on generally liberal vs. conservative issues like abortion and gun control in other states.

Wiener’s approach is similar to the provisions in another pending California bill responding to efforts in other states to restrict abortions.

It would bar the enforcement of civil judgments against doctors who perform abortions on patients from other states. It’s among several measures designed to make California a sanctuary for people seeking or providing abortions.

In a spinoff move, California is also advancing efforts to target illicit assault-style weapons with legislation patterned on Texas’ attempt to restrict abortions, by allowing private citizens to take legal action against gunmakers.

Like the abortion bill, the transgender bill would reject any out-of-state court judgments removing transgender children from their parents’ custody because they allowed their children to receive gender-affirming healthcare.

Because the judgments in other states wouldn’t be enforced in California, families could move to California to avoid having their children taken away from them.

The measure would also make it California’s policy that any out-of-state criminal arrest warrants based on an alleged violation of another state’s law against receiving gender-affirming care would be the lowest priority for law enforcement in California.

“We will not allow other states to hunt our community within California’s borders,” said Tami Martin, legislative director at Equality California, which says it is the largest statewide LGBTQ+ civil rights organization in the US Her organization is co-sponsoring the bill with Planned Parenthood Affiliates of California.

Arkansas last year became the first state to pass a law prohibiting gender-confirming treatments for minors, and Tennessee has approved a similar measure.

Idaho legislators last week introduced legislation that would make it a felony for parents to allow their children to obtain gender-affirming care, though the measure failed.

Advocates of California’s measure said there are also legislative efforts to restrict gender-affirming care pending in Alabama, Arizona and Louisiana.

Supporters of the California bill said efforts to suppress transgender youth can lead to fear and mental health issues including depression and suicidal thoughts.

Those problems can be magnified if youths are denied access to gender-affirming care including hormones and puberty-blockers, or if their parents were prosecuted, bill supporters said.

“Families will be separated and children will die because of these policies,” said Alexis Sanchez, director of advocacy and training at the Sacramento LGBT Community Center.