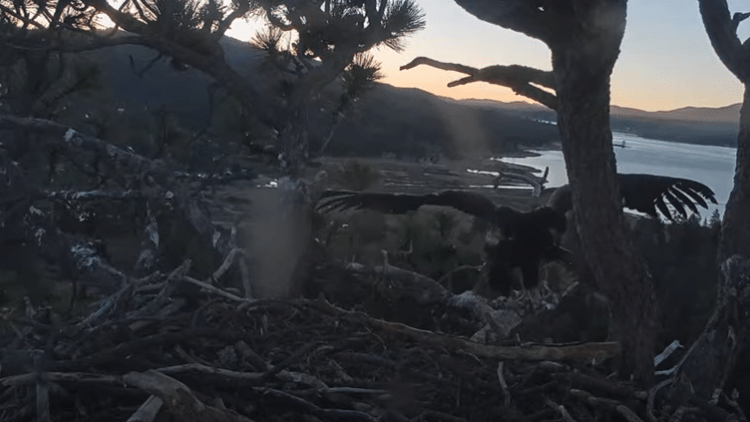 Big Bear’s beloved baby eagle Spirit has finally spread her wings and flown from her nest.

The eaglet born to Jackie and Shadow back in March has officially flown for the first time, and it was caught on camera.

Spirit had officially entered the Fledge Watch, meaning she could take flight at any moment. She was seen practicing for her big moment by spreading her wings and jumping around in her nest.

The highly anticipated moment was caught on camera by the eagles’ nest camera, operated by the Friends of Big Bear Valley.

A bald eagle’s fledging which means preparation to fly begins between 10 and 14 weeks.

Spirit was named by a group of third graders who won a naming contest.

The camera provides 24-7 footage of the nest, provides sound, and is solar powered.

Spirit’s nest is in the San Bernardino National Forest and has been used actively sine the fall of 2013.

Even though she has taken her first flight out of the nest that does not mean Spirit is gone forever.

For the first couple of weeks, Spirit will continue making trips to the nest to get food or rest, but will eventually find her own way. She will go on different adventures that could take her even thousands of miles away from her nest.

Bald eagles have a rich history in North America. They are considered North America’s largest birds and there is a large population in California.