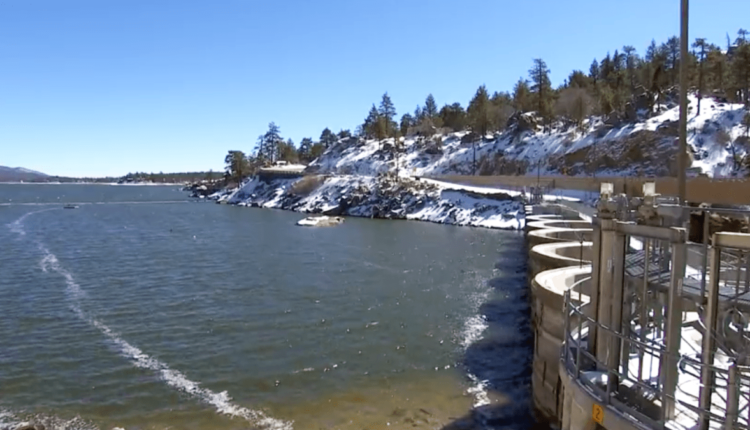 This week’s fast moving storm only had a small impact on California’s snowpack, and that is bad news for Big Bear Lake, which hasn’t been at full capacity since 2012.

At Snowdrift Snow Tubing Park, the hills are filled with screaming children; all of them enjoying the aftermath of the recent storm.

“It’s perfect because we are from Mexico, and we came far. We want to see snow you know,” Morris Sianturi, Pomona resident, said. “This is just beautiful with the kids just running around sliding around it’s a wonderful feeling.”

But despite the fresh layer of new snow on local mountains, the outlook for Big Bear Lake’s water level is not good.

The US Drought Monitor for California shows Southern California in moderate to severe drought.

“So far, going into winter, we are in February and we have only gained one foot of lake elevation,” Mike Stephenson said.

Mike Stephenson is with the Big Bear Municipal Water District.

He says the lake level is about 15 feet below full capacity: that’s about the same level before the power December storms.

“The problem is the sun came out and the wind started to blow, and evaporation started taking over. Already we’ve already lost about three inches we gained from that December storm,” Stephenson said.

January and February are usually the wet months, but Stephenson says so far they haven’t produced much rain or snow.

He said more storm systems are needed in the coming weeks to keep Big Bear Lake from reaching critical levels where some marinas would have to be shut down during summer, meaning less launch ramps for boating.

“It’s a tough time the marinas that have launch ramps that help us augment some of that flow of traffic. Their launch ramps start to dry up and it’s becomes difficult for the people,” Stephenson said.

That’s why he is hoping for a March miracle: a series of cold storms.

Gangsta Rap Takes to the Blockchain

Tiger Woods, a dinner at the Italian restaurant