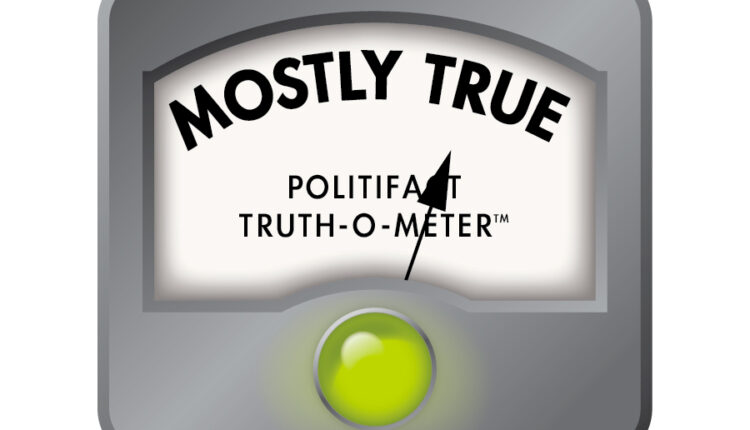 “Millions of hardworking Americans will no longer have to worry about unexpected medical bills.”

During a Feb. 10 speech about lowering health care costs, President Joe Biden made a sweeping declaration that Americans would no longer need to worry about surprise medical bills.

“No more surprise billing. No more,” said Biden. “Millions of hardworking Americans will no longer have to worry about unexpected medical bills.”

Biden was referring to a bipartisan law, the No Surprises Act, that was passed by Congress during the Trump administration in late 2020 and took effect on Jan. 1, 2022. The law is supposed to protect consumers from often-expensive out-of-network medical bills.

The president offered this example of the kinds of bills the law would prevent: “If your health care plan did not cover a particular doctor but you didn’t even know he was being consulted and you get an extra bill for $2,000-$5,000 — they can’t do that anymore.”

Still, Biden exaggerated when he said there would be no more surprise billing. He had a point that the new law would provide newfound protection against certain charges for millions of people, but his statement went further than what the law accomplishes.

We decided to dig in and find out how far the law goes to prevent unexpected medical costs.

Surprise Bills and the No Surprises Act, Explained

The federal government estimates that the law will apply to about 10 million surprise bills a year. They are often associated with emergency care provided when patients must go to the closest medical facility and can’t check the network status of the facility or emergency room physicians. They also may stem from nonemergency hospitalizations or surgeries at an in-network facility that involve a provider, such as an anesthesiologist or radiologist, who is out of network and bills separately.

Before the law, patients could be left on the hook for charges much higher than their insurer’s in-network negotiated rate because their health plan might pay only part of the bill or deny the claim completely.

Trying to get any portion of an out-of-network bill covered often required lots of paperwork and phone time with insurance providers, and consumers were sometimes still left with a big bill.

However, with the No Surprises Act, consumers are shielded from these out-of-network bills. Insurance companies are required to cover the out-of-network claims, paying providers the rate they pay for the service when it is delivered by an in-network provider or facility and leaving consumers responsible for only the in-network cost sharing. Finally, the new law created an arbitration process that kicks in if the insurer and provider dispute the payment rates and takes the consumer out of the negotiation.

“So if the new law works well, patients should not only save money, they could be relieved of some complicated claims-filing paperwork,” said Karen Pollitz, a senior fellow for health reform and private insurance at KFF.

Although the No Surprises Act is relatively comprehensive for out-of-network bills, some notable exceptions could result in large bills for consumers, said Loren Adler, associate director of the University of Southern California-Brookings Schaeffer Initiative for Health Policy.

One glaring omission is that charges associated with using a ground ambulance to get to a hospital in an emergency are not covered. A 2021 Peterson-KFF Health System Tracker analysis found that half of emergency ground-ambulance rides resulted in an out-of-network charge for those with private health insurance.

It’s also important to note that politicians often use the term “surprise bills” as shorthand for out-of-network bills. Certain large medical bills that consumers receive for in-network care may be “surprising” to them, but, technically, they won’t fit under the No Surprises Act if they’re not an out-of-network bill.

This can be confusing to consumers who receive a bill that has nothing to do with what the No Surprises Act was designed to address. For instance, consumers can still be subject to huge fees because of hospital overcharges or insurer mistakes, as shown in many stories in the KHN “Bill of the Month” series.

Still, the four health policy experts we consulted told us that Biden’s statement was mostly accurate.

“My general reaction is that it’s broadly correct,” said Benedic Ippolito, a senior fellow and health care expert at the American Enterprise Institute. “But it’s not quite true to say that there are bills that you don’t need to worry about anymore.”

There are a couple of other sticking points in the No Surprises Act that could mean patients still end up with a large or surprising medical bill.

Currently, the interim final rule implementing the No Surprises Act leaves some medical facilities — including urgent care centers, birthing centers, hospice, addiction treatment facilities, and nursing homes — off the list of places covered by the law.

One other issue: Facilities can ask patients to sign a prior written consent that waives their rights under the No Surprises Act in certain situations; this allows patients to be charged out-of-network prices for procedures. Medical providers are not allowed to ask patients to sign the form for emergency care or for services in which the patient doesn’t choose the doctor.

“That’s not to say that there is absolutely zero risk,” said Matthew Fiedler, a fellow with the USC-Brookings Schaeffer Initiative for Health Policy. “Probably the scenario I am most worried about is post-stabilization care following emergency care.”

Even in those cases, the provider would have to get patients to sign a form they may not understand in which they waive their rights and put themselves at risk of getting an out-of-network bill they weren’t expecting. “That’s not impossible, but I think it’s probably also not trivial,” Fiedler said. “So, all things considered, I think we are talking about really unusual scenarios.”

Even so, it’s important for consumers to be aware that while the No Surprises Act will protect them from most out-of-network bills, they could still receive other types of surprising bills because the U.S. has such a complex health care system. While effective, the law is not infallible.

Biden declared that because of the No Surprises Act, which took effect in January, millions of Americans will no longer have to worry about unexpected medical bills. It’s estimated the law will protect against 10 million surprise bills a year.

Although it’s true that consumers are now shielded from many out-of-network bills, which are often termed “surprise bills” by lawmakers, patients still could end up with other types of large and unexpected medical bills. Biden’s statement is a bit too general and sweeping and needs clarification and additional context.

We rate this claim Mostly True.

The Brookings Institution, Understanding the No Surprises Act, Feb. 4, 2021

The Centers for Medicare & Medicaid Services, No Surprises: Understand Your Rights Against Surprise Medical Bills, Jan. 3, 2022

Phone interview with Benedic Ippolito, a senior fellow and expert in health care at the American Enterprise Institute, Feb. 11, 2022

Phone interview with Matthew Fiedler, a fellow with the USC-Brookings Schaeffer Initiative for Health Policy on Feb. 11, 2022