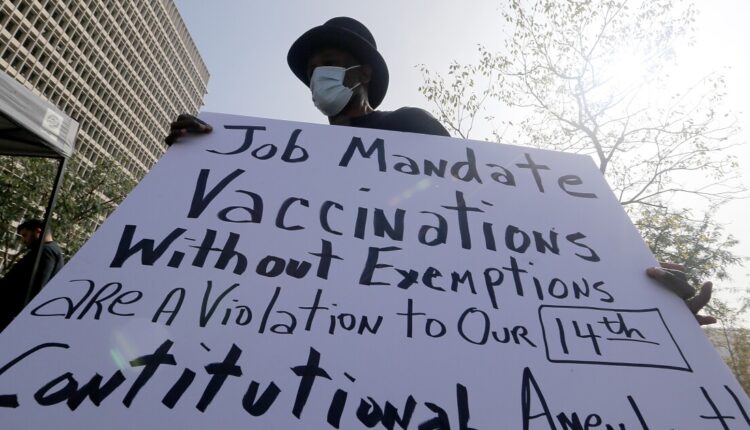 It is the latest volley in the heated battle between some public sector employees and governments over public health requirements, in which workers have protested and taken legal action.

Controversial is the rule announced in August that all county’s health care workers, including first responders, must be vaccinated unless they have medical reasons or religious beliefs that rule them out. Neither Davis nor the city have the authority to make such an order, the lawsuit said, which also referred to COVID-19 vaccines as “experimental gene modification therapies.”

“Firefighters and other first responders have served bravely during the COVID-19 pandemic,” Scott Street, an attorney for plaintiffs, wrote in an email. “You were on the front lines when others sought protection. They earned the right to be heard, but in enforcing the county’s unlawful mandate, the City of Beverly Hills largely ignored them and put politics before facts. “

“The work of emergency first responders puts them at the forefront of patient care,” said Keith Sterling, chief communications officer for the city of Beverly Hills, in a statement. “While we haven’t seen the lawsuit, the city remains committed to protecting the health of our residents and visitors during this ongoing pandemic.”

The union that represents the firefighters, Beverly Hills Firefighters Assn., Has said it encourages its members to get vaccinated but believes it should be a personal choice.

The lawsuit said Beverly Hills “cross-examined firefighters who requested religious exemptions to undermine their credibility and pressurize them, under threat of prosecution, to renounce their religious freedom and get the shot.” The actions are tantamount to religious discrimination, according to the lawsuit.

At least 22 firefighters were interviewed between September 28 and 30, and eight, including Sattley, were denied religious exemptions, the lawsuit said. Some of those firefighters were then given the vaccine, but Sattley refused and was reportedly put on unpaid leave. The city did not give him an opportunity to challenge his suspension, which violated his right to due process, the lawsuit said.

Berardinelli was given a temporary, 30-day religious exemption, but the lawsuit alleges the city retaliated against him by assigning him a job that received fewer calls and prevented him from answering certain calls.

The lawsuit also cites a September tweet from Mirisch sharing a letter he wrote to Beverly Hills Weekly questioning the fact that about 30% of the city’s firefighters requested religious exemptions from the mandate .

“If one of the firefighters who have applied for exemptions on an unprecedented scale plays the system – and it is very likely that many, if not most of them – do so – that is downright outrageous,” wrote Mirisch. “The firefighters who apply for an exemption will be questioned under threat of perjury to determine whether their refusal to vaccinate is medically necessary or rises to the level of good faith religious belief.”

The tweet represented retaliation against plaintiffs for exercising their 1st amendment rights, the lawsuit said.

On Saturday, Mirisch defended his remarks, saying that he personally believed that the city should not grant any religious or medical exemptions at all, although he said the majority of the city council did not think so.

“To say that people who are supposed to serve the public behave confidently is an understatement,” he said, speaking of taking responsibility for their department.

“There was a rally in front of the town hall that I would call Anti-Vaxxer-MAGA-Palooza,” said Mirisch. “Here they claim they are not against science or the vaccine, but they were standing next to people holding signs that said ‘COVID is a scam’. You speak from both sides of your mouth. “

Speakers at the rally included both Sattley and the union’s president, Victor Gutierrez, who, according to the Beverly Hills Courier, urged members to support Sattley. Sattley has become a staunch opponent of vaccine requirements. His Instagram page is full of posts denouncing such rules, stating that they delay response times and reduce the level of service.

“I claim it is not your department – it was never your department,” said Mirisch. “This is our department. It’s the division of the residents and the community, and the fact that they act so confidently shows how out of hand it has gone. “

He said that as the conflict progressed, elderly residents have voiced their fear of calling 911 out of concern that the fire department paramedics who respond may be unvaccinated.

“Traditionally, the community has always adored our firefighters and had a great relationship with them,” he said. “I think that unfortunately changes that irrevocably.”

He added that he was grateful for the roughly 80% of Beverly Hills firefighters who were vaccinated.

The plaintiffs are demanding damages, legal fees and an injunction that prevents the district from enforcing the mandate. The lawsuit also calls for judicial declarations that the mandate exceeds the county’s powers under state law or is unconstitutional, that the mandate violates the right to privacy under the state constitution, that the city’s practice of questioning those seeking religious exemption, both against the 1st and the mandate itself and must be discontinued and that the city cannot take negative action against the firefighters without giving them the opportunity to contest it.

An organization called Protection of the Educational Rights of Kids, which is described as a group that campaigned for medical freedom and individual rights during the pandemic, is also listed as a plaintiff and is providing financial support to the case, lawyers said. The group had previously participated in lawsuits that challenged vaccine mandates for LA County’s workers and students in the Los Angeles Unified School District.

It has also organized rallies against vaccine mandates, including one last month in Long Beach where Sattley was listed as a speaker.

That came after another rally where thousands of people, including city officials, gathered outside Los Angeles City Hall to protest vaccination regulations.

Other first responders have tried to stop vaccine mandates. Last week, a superior court judge denied a motion by the Los Angeles Fire Department’s Union for an injunction to delay enforcement of the city’s vaccine mandate. In September, a separate group of 500 Los Angeles firefighters filed a lawsuit against the city for requiring LA workers to be vaccinated against COVID-19.