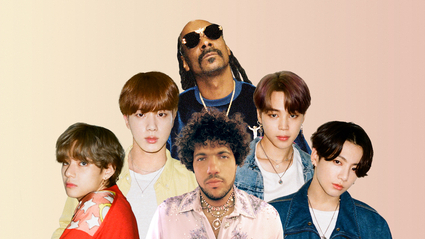 Super producer Benny Blanco has always showed a flair for comedy in interviews and awards show appearances — where he’s accepted honors for hits by Justin Bieber, Ed Sheeran, Katy Perry, Maroon 5 and many others — and he puts in his best appearance yet in the new video for “Bad Decisions,” his collaboration with BTS and Snoop Dogg.

In it, Blanco plays a die-hard BTS fan who spends his entire day getting ready for their concert: dancing while brushing his teeth in the morning, baking a cake for them, putting on his flyest outfit and then driving hazardously to the arena ( which occasional cameos from Snoop). Like Snoop, the group appears only in separate videos, but they’re omnipresent in the video via posters and other memorabilia decking Blanco’s house in the San Fernando Valley.

His efforts come to an unexpected conclusion at the end of the video, which you can watch below.

We partnered up with musicians @ItsBennyBlanco, @bts_bighit, and @SnoopDogg to create something unheard of 👀

The rollout for the single was spearheaded by a string of short videos uploaded by Blanco, starting with a video that features the producer begging Jin, Jimin, Jung Kook and V for a spot in the group. “What up guys. Look, I know we haven’t know each other that long but I want to be in the band,” the producer proposes in the video. “I want to be in the band — I want to sing and dance. I think I could do it.”

“Bad Decisions” will be the first single from Blanco’s forthcoming album, which is scheduled to be released later this year.

“I’m still pinching myself,” Blanco gleamed in a statement about the collaboration. “I can’t believe I have a song coming out with Jin, Jimin, V and Jung Kook of BTS and Snoop Dogg. It doesn’t even feel real!” He’s also worked as a songwriter and producer alongside artists like Ed Sheeran, Justin Bieber, Halsey, Rihanna, and Katy Perry.

BTS’ participation in “Bad Decisions” marks the group’s “return” after announcing a hiatus in June. Since then, the boy band members have all been working on advancing their solo careers. Most recently, J-Hope performed solo at Lollapalooza and made history as the first South Korean artist to headline the main stage at a major US music festival.