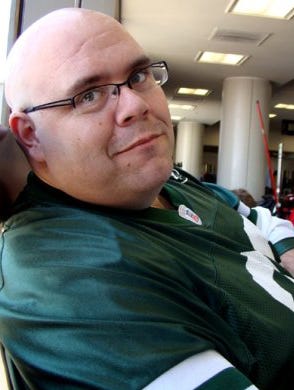 If you’ve been part of the high school music scene in the Ventura and Los Angeles boroughs, you’ve probably heard of Michael Gangemi, better known as Mr. G or simply G.

Gangemi, who inspired a legion of student musicians for almost 30 years, died on June 20 of liver and kidney failure. He was 49.

For those who knew Gangemi, especially those in the Conejo Valley where he grew up, it is a devastating loss to someone who found himself in a new phase in his life as a band director.

Gangemi and his siblings grew up in Thousand Oaks. His mother, Gina Zumbluskas said he learned to love music at the age of 6. When he was 7 years old, she said he was given a toy organ for Christmas.

“And we came downstairs in the morning on some Disney topics,” she said. “He just ripped them out.”

He grew up to be a “band geek teenager,” as Zumbluskas put it.

James Bresden said that Gangemi was already a big deal with his trumpet playing skills by the time they first entered Westlake High School. He had known Gangemi since fourth grade at Ladera Elementary School in Thousand Oaks, where the two became best friends.

“The lore of G really started when he got into high school,” said Bresden.

Mike Gangemi liked being Mike Gangemi, said Bresden. He also had the talent to support it.

There is a moment that Bresden can see clearly in his mind’s eye. It’s senior year and the band is putting on a field show on Victor Hugo’s “Les Misérables”. Gangemi has a huge trumpet solo in “I Dreamed a Dream” under the direction of Bresden.

“It was a nice thing to see,” said Bresden.

Bresden remembers how nice it was to hear Gangemi play and to see how proud he was of himself. They won this band festival and entered sweepstakes, he said.

After graduating in 1990, Gangemi held a number of jobs. He coached the Moorpark High School band for a number of years before returning to Westlake High. He also directed the Colina Middle School jazz band for more than a decade.

Even during his time in Westlake, he helped the band from Moorpark for a few years, according to former band director Bob Hackett.

Hackett said it was the teamwork between Gangemi and himself that helped the Moorpark band gain national recognition.

Jackie Funk, who had known Gangemi since 1995 when she was a freshman at Moorpark, said her former teacher had a unique ability to connect with each child in meaningful ways.

Funk later played in Gangemi’s band Lane 29 Orchestra, which his friends said he was very proud of.

“As soon as he started teaching, he went from being a musician to being a teacher,” said Bresden.

Brian Peter, band director at Westlake High, met Gangemi in 2001. Peter was the trainer and Gangemi had been hired as the band’s deputy director. Gangemi had the same role when Peter returned as band director in 2006.

“He was my professional partner,” said Peter. “… We disagree on some things, but we would challenge each other.”

“He gave young people endless confidence and he had an endless tool kit on how to do that,” he said.

Students, he said, were drawn to Gangemi. Peter stated that he was like a teenager in some ways, which enabled him to get in touch with students.

Gangemi has received several awards throughout his career and has held positions in various music organizations including SCSBOA, California Band Directors Association and Ventura County Honor Band for years. It was remarkable considering he only recently became band director.

Everyone who spoke about Gangemi emphasized his generosity.

Funk said his kindness to others was contagious, and no matter what was going on in his life, he wanted to make sure everyone around him was fine. Many remembered his constant habit of paying for people in cars behind him during fast food passages.

In 2019, Gangemi left Conejo Valley to take a position as co-band director at Santiago High School in the Riverside County community of Corona.

It was a leadership position he had long been looking for, and it was a long road to get there, including later study and teaching.

He immediately fell in love with the role and was looking forward to working with the band’s co-director Joe Dudek, Bresden said.

Peter said it was unfortunate that Gangemi’s tenure in Santiago was turned upside down by the COVID-19 pandemic. But that didn’t bring him down. Bresden remembered how excited Gangemi was to hook him up with a concert via Zoom.

Corona-resident Anna Bourland, whose son Gangemis was a student in Santiago, organized a GoFundMe fundraiser to pay for his medical and living expenses.

Dylan Johnson,a former Gangemi student commented on the GoFundMe page that the teacher will live on in the hearts of the many he inspired.

“He lives in all of us who have studied with him, played with him and laughed with him (and we are many),” wrote Johnson.

Memorial services will be held in Westlake High Auditorium on July 31 at exactly 4:29 p.m. – a reference to Gangemi’s band, Lane 29.

The GoFundMe for Gangemi is available at gofundme.com/f/mike-gangemi-medical-expenses-and-after-care.

Shivani Patel covers The Star’s training as a Report for America Corps member. You can reach them at [email protected] or 805-603-6573. She is also on Twitter at @shivaaanip.