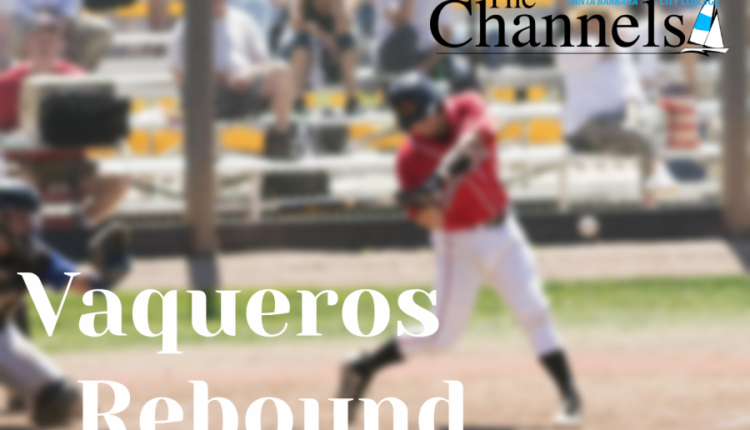 The “Vaqueros Rebound” keeps the City College community up to date with short recaps of all spring 2022 athletics action, published every Monday and Friday. Missed a game and want to know what happened? Catch it on the “Rebound.”

Ryan Gay and Diego Pallandino shot low rounds of 78 to lead City College, with both finishing five shots off the individual lead. As a team, the Vaqueros finished 35 shots back of first place College of the Canyons, and six strokes off third place Glendale College. Next week is the WSC Neutral, an invitational that will take place on Monday, March 21 at 10 am

South No. 19 City College scored three runs in the bottom of the sixth and eighth innings to rally past south No. 4 Allan Hancock College Bulldogs and take the first of their three meetings this week. Tyler Imbach drew a bases-loaded walk for what ended up being the decisive run in the eighth, and Matty Fung went 2-for-4 with a double and an RBI for the Vaqueros (13-7, 6-1). Jake McBride earned the win in relief, his third. City College faces Allan Hancock on the road on Friday, March 18 at 2:30 pm

The Vaqueros were held to one hit by Moorpark College, who entered the day with the second-best overall record in the WSC-North at 12-5. City College starter Lauren Indermuehle held the Raiders to three runs through the first five innings, and allowed eight hits with a strikeout and two walks for the game. Linnaeus Sandahi recorded the Vaqueros a hit, as Moorpark starter Lindsey Cowans had nine strikeouts.

No. 9 City College fell for the seventh time in eight games, falling in straight sets to no. 4 El Camino College. After dropping the opening set 25-15, the Vaqueros (3-8, 1-5) kept the second and third sets close, but ultimately fell 25-22 and 25-23. City College continues its six-game homestand against No. 9 Antelope Valley on Friday, March 18 at 6 pm

City College scored five runs in the bottom of the fifth to invoke the “run rule” and earn their fourth win out of their last five games. Natalie Depasquale and Sandahi each knocked in a pair of RBIs, and pitcher Sara Hammonds went the first three innings, scattering six hits with two unearned runs and a pair of strikeouts. The Vaqueros (7-17, 2-1) travel to Allan Hancock College in Santa Maria on Tuesday, March 22 for a WSC-North contest at 1 pm