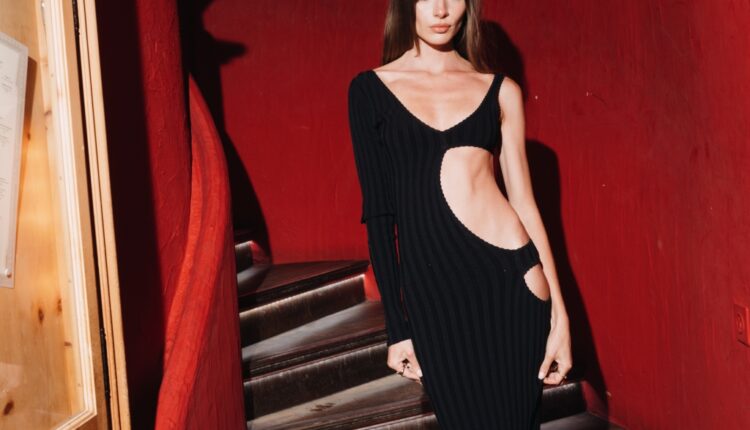 To be sure, he has brought awareness to Bally with his first fashion show for spring 2023 in Milan last September, and the launch of a first capsule collection celebrating the brand’s storied curling boot fusing unexpected Western details with traditional mountaineering motifs.

“We’ve seen a lot of attention around this capsule,” said chief executive officer Nicolas Girotto in a joint interview with Villaseñor in St. Moritz over the weekend.

They were in town to celebrate the launch of the capsule collection in the newly refurbished Bally boutique, one of the first to display the brand’s new logo. This is inspired by a circa 1930s photograph of a boutique in France designed by architect Robert Mallet-Stevens.

The capsule in the windows is hard to miss, with Bally’s curling boots scaled up as thigh-high boots or down as shearling slides; topstitched with Western motifs reminiscent of cowboy boots, or padded and laced with drawstrings as a hybrid snow boot.

“We are going outside the Bally boundaries, adding some quirkiness and drawing attention to the brand layer by layer,” said Villaseñor. “It’s a way to lure customers naturally and excite them, we see a big shift happening, and new customers walking in our stores and trying things out.”

Brand alignment, however, remains crucial. Case in point: Girotto and the designer held a dinner to mark the capsule’s launch at the legendary members-only party destination Dracula’s Ghost Riders Club, all red walls and red velvet seats, images of bats as decorations and a coffin at the entrance.

There was a reason for choosing the unique location, though, as the club was founded in 1974 by photographer Gunter Sachs, who shot an iconic campaign for Bally in 1977. Villaseñor made quite an appearance, wearing a supersized fur coat flanked by Cindy Bruna, Tina Kunakey, Mara Lafontan and Chloé Lecareux, among others, dressed in Bally’s spring collection, debuting in stores in February.

Staging the event in St. Moritz was only natural, said Girotto, given the luxury connotation of the resort town and the international guests it attracts. “We felt it was the right place to launch the first capsule and St. Moritz is buzzing now.”

Girotto and Villaseñor have been touring Switzerland together and the designer said he felt it was important “to get a feel” for what the country is about. “I love it and, as I explore it, I enjoy showing the world part of this lifestyle,” he said.

“It’s part of our history, we are deeply rooted in Switzerland since 1851 and we are proud of what it means, embodying the Swiss values, but we don’t want to be ambassadors of Switzerland, we are here to create beauty,” noted Girotto.

The duo are keen on adding a playful touch to the brand, and revisiting the curling boot, linked to the history of Bally since the 1950s and a pillar of the collections, in a fun way is key. “We don’t want to be too serious, although our approach to the business is serious,” said Girotto.

Villaseñor will stage his second runway collection for Bally on Feb. 25 during Milan Fashion Week and, while keeping details under wraps, the coed lineup will include lots of velvet, he said. “It’s a bigger leap, a full evolution,” he offered. “Like for musicians, the second album is the toughest, as there are no expectations with the first,” he said smiling.

Villaseñor is basically working on a white canvas, as Bally’s core business has traditionally been that of shoes and leather goods accessories. For spring, he presented a sensual woman who loves to show some skin — and the models at the Dracula Club looked beautiful doing just that — and he injected a strong American point of view to the brand.

Born in Manila, Villaseñor grew up in Southern California’s San Fernando Valley and rose to become a fashion go-to for Kendrick Lamar and Jay-Z, founding his own brand Rhude in 2015, influenced in this path by his mother, a tailor, and his father, an architect. At Rhude, he has specialized in elevated streetwear and casual tailoring, but he firmly keeps this brand separate from Bally, he said.

Girotto realizes tapping Villaseñor in January last year was “a bold choice, but you can’t win if you do what is expected of you. If you look at Bally’s past, it has a history of innovation — social, industrial — and it’s fascinating. The industry needs risk-taking and bold choices, youth and creativity to elevate and bring energy to the brand.”

Villaseñor will help Bally further develop the US market, an objective for 2023. “We need to strengthen our presence there, we are below our benchmark audience,” said Girotto.

A new store will open next month in Houston, and the company will refurbish the Bally unit in New York’s Meatpacking District. The boutique in Zurich will also be renovated according to the designer’s blueprint, which features cream walls and lacquered furniture from the 1920s, “classic but sexy,” he said.

There are 320 Bally stores globally, of which 160 are directly operated. The brand is also available at 500 wholesale accounts.

While declining to provide a sales figure, as per parent JAB Holding Company’s policy, Girotto said 2022 closed with sales up double digits compared with 2021.

“We see 2023 as a year of opportunities and risks, including the recession, the inflation and the war, but the reopening of China is good news, and we hope the country will stabilize after the first quarter,” said Girotto. “I am more optimistic about 2023 than I was about 2022 but the recent events have taught me to be cautious.”

Bally has a strong brand awareness in Asia, and China alone accounts for 40 percent of sales. “Add another 15 percent coming from the rest of Asia,” said Girotto.

Menswear accounts for 60 percent of revenues and the executive is set on growing the womenswear category, originally Bally’s core business.

Shoes account for 40 percent of sales, followed by accessories, which represent 35 percent of the total. Ready-to-wear makes up the remaining share.

Villaseñor believes in staging more trunk shows around the world, as they are “increasingly important,” and plans to add even more customization “to celebrate Bally’s craftsmanship.”

Online sales represent one third of full price retail revenues, as the company has been investing in this channel. “It’s growing very fast and we have strong ambitions,” Girotto said, noting that Bally has recently updated its e-commerce. It has added a new role, that of chief digital officer, appointing Nathalie Sisouk, who has more than two decades of experience in digital transformation working at L’Oréal and LVMH Moët Hennessy Louis Vuitton.

More capsules are in the pipeline as “a modern way to introduce novelty and rarity,” said Villaseñor, teasing the idea that a beachwear capsule could be next up.