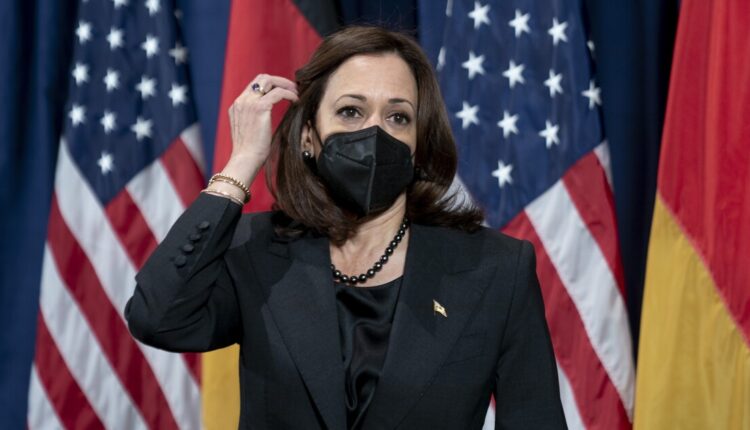 With tens of thousands of Russian troops massed near Ukraine’s northern frontier, and as tensions intensified in the country’s eastern Donbas region, Western and Russian leaders continued to engage in a high-stakes Sunday dance mixing equal parts diplomatic bickering and military puffery — but with little sign that their efforts could successfully forestall the biggest conflict in Europe since World War II.

In the latest attempt to avert war — in what appears an excruciating test of wills between Washington and Moscow — President Biden late Sunday agreed “in principle” to a summit with his Russian counterpart, Vladimir Putin, the White House said.

The eleventh-hour round of diplomacy was coaxed by French President Emmanuel Macron and came as a Russian invasion appeared to be moving ever closer and other appeals for de-escalation faltered. White House Press Secretary Jen Psaki said the summit would probably follow a meeting later this week by the two countries’ top diplomats, Antony J. Blinken and Sergei Lavrov.

“We are always ready for diplomacy. We are also ready to impose swiftly and severe consequences should Russia choose war instead,” Psaki said in a statement. She said the meetings between the diplomats and the presidents are contingent on Russia not proceeding “with military action.”

Meanwhile, in Ukraine’s east, where the Ukrainian government has been mired for years in a stalemate with Russia-installed separatists, observers reported barrages of shelling across the cease-fire line established between the belligerents in 2015. And in a step designed to bolster Moscow’s narrative of an impending Ukrainian onslaught on the separatist enclaves, pro-Russia authorities Sunday suspended leisure, cultural, entertainment and educational events until further notice. Earlier in the weekend, the separatists began evacuating thousands of women and children from Ukraine while ordering men of fighting age to prepare for battle.

The intensification of hostilities in the east came as Belarus announced that about 30,000 Russian troops would extend their stay beyond the conclusion of joint exercises, countering earlier statements that not a single Russian soldier would remain on Belarus’ territory after Sunday.

In a statement released by the Belarusian military on the messaging app Telegram, Belarusian Defense Minister Lt. Gen. Viktor Khrenin said that though the exercises — dubbed Allied Resolve 2022 — had concluded, the “increase in military activity near the external borders of the Union State [Russia and Belarus] and the aggravation of the situation in Donbas” had pushed Putin and President Alexander Lukashenko of Belarus to decide “to continue checking the response forces of the Union State” — a statement implying that they would remain indefinitely in the area and feeding fears of an imminent plan to invade.

Later Sunday, the US Embassy in Moscow issued a security warning that “media sources” had reported “threats of attacks against shopping centers, railway and metro stations, and other public gathering places” in locales such as Moscow, St. Petersburg and the Russian border along Ukraine. The embassy did not elaborate on why attacks might occur or who would be behind them.

The embassy advised avoiding crowds, carrying proper identification and readying evacuation plans that “do not rely on US government assistance.”

The heightened tensions came as Vice President Kamala Harris concluded a trip to Munich, Germany, on Sunday aimed at shoring up Western alliances.

Meanwhile, Biden, who said Friday that he believed was imminent, huddled with his national security staff on Sunday. The president and other Western leaders have warned that a Russian disinformation campaign is underway aimed at blaming Ukraine for starting a war — despite a lack of evidence that the country has provoked tensions with Russia-backed separatists.

“It certainly looks like everything we said was likely to occur in the lead-up to the actual invasion is happening,” Secretary of State Blinken said on NBC’s “Meet the Press.”

Blinken reiterated his plan to meet with Russian Foreign Minister Lavrov this week as long as Russia holds off on any invasion, adding: “[I]t’s my responsibility to do everything I can to try diplomatically to prevent a war. And so I will leave no stone unturned to do that.”

Defense Secretary Lloyd J. Austin III agreed there was little expectation that tensions would be cool.

“I don’t believe it’s a bluff,” Austin said on ABC’s “This Week.” Putin has “assembled the kinds of things that you would need to conduct a successful invasion.”

Still, Anatoly Antonov, the Russian ambassador to the US, insisted “there is no invasion and there is no such plans” in an interview with CBS’ “Face the Nation” in which he brushed aside questions about the extension of drills in Belarus and other actions that have alarmed the West.

Concluding three days of meetings in Munich with European allies before departing for Washington, Harris emphasized unity and solidarity and a commitment to Ukraine.

But she stopped short of making any new concessions to Ukrainian President Volodymyr Zelensky a day after his fiery speech at the Munich Security Conference calling on allies to do more to help his nation avoid — and potentially defend itself from — a Russian attack.

“Let us recognize the position he’s in: His country is virtually surrounded by Russian troops,” Harris said during a 16-minute question-and-answer session with reporters at her hotel. “He came here to make a very clear point that he does not stand alone. In fact, I told him in our meeting the United States stands with you.”

Harris, however, would not commit the US to delivering additional defense aid to Ukraine, as Zelensky requested during a meeting with her Sunday.

“Depending on what happens in the coming days, we will reevaluate the need that Ukraine has and our ability to support,” she said.

Zelensky risked leaving his vulnerable country to meet with Harris and deliver a last-ditch plea to allies and security experts gathered in Germany.

“We will defend our land with or without the support of partners,” he said Saturday. “Whether they give us hundreds of modern weapons or 5,000 helmets.”

“We appreciate any help, but everyone should understand that these are not charitable contributions that Ukraine should ask for,” Zelensky continued. “This is your contribution to the security of Europe and the world, where Ukraine has been a reliable shield for eight years.”

Ukrainians on Sunday commemorated the eighth anniversary of the Maidan protests. About 50 people were killed on Feb. 20, 2014, during anti-government demonstrations against then-President Viktor Yanukovich. A Moscow ally who had rejected closer ties with Europe, Yanukovich fled the country the following day. Ultimately more than 100 Ukrainians died during the demonstrations.

Zelensky has intensified his country’s move toward Europe, provoking the anger of Putin, who sees Ukraine, a former Soviet republic, as part of a return to a more powerful Russia.

Harris avoided commenting on Zelensky’s stated intention to seek membership in the North Atlantic Treaty Organization. Putin has demanded that NATO rule out membership for Ukraine
as a condition of ending tensions. While Kyiv is still a long way from qualifying for membership, the US and NATO have rejected Putin’s demand.

“I’m not going to second-guess President Zelensky’s desires for his own country,” Harris said, adding that NATO membership “is a process,” one that “doesn’t happen overnight” and is a matter for all 30 countries in the alliance to decide.

Harris also held firm to the administration’s threat of economic sanctions as a deterrent against Russia. Zelensky has urged the West to levy sanctions before a potential invasion, suggesting that doing so after tanks cross his border won’t do his country much good.

Macron called Putin on Sunday in the latest attempt at finding a diplomatic off-ramp to avoid hostilities.

A Kremlin statement after the Macron call said Putin emphasized the necessity for the US and NATO to take seriously Moscow’s concerns over long-term security guarantees. Putin blamed the escalating tension on “provocations from Ukrainian militants” as well as NATO countries’ arms and material shipments to Kyiv.

He added that the move by NATO encouraged the Ukrainian government to pursue a military solution to retake the Donbas region. Putin also accused Kyiv of slow-walking the Minsk accords, the 2015 agreement meant to stop the violence in the Donbas region and reintegrate separatist areas under government control.

The Elysee Palace readout of the same meeting said the two leaders agreed to work “intensively to enable a meeting of the Trilateral Contact Group to be held in the next few hours,” referring to a body that includes representatives from Russia, Ukraine and the Organization for Security and Cooperation in Europe, or OSCE.

The aim would be to “obtain a commitment from all parties to a cease-fire on the line of contact,” the statement said, noting that Putin and Macron agreed they would “give priority to a diplomatic solution to the current crisis and to do everything possible to achieve it.”

The announcement of the possible summit came hours later.

Khrenin, the Belarusian defense minister, said that joint military exercises involving about 30,000 Russian troops gathered near Ukraine’s northern border for the last 10 days would continue beyond their scheduled end date of Sunday, according to the Russian state news agency Tass. The force represents a significant portion of the estimated 150,000 troops positioned for a potential invasion.

Over the weekend, Russian news outlets posted images and videos of families making their way to refugee encampments set up by the Russian government. Each person arriving would receive 10,000 rubles, equivalent to $130.

Harris on Sunday echoed the administration’s heightened warnings of Russia’s readiness for an imminent invasion of Ukraine.

“As the president has said, we believe that Putin has made his decision,” she said. “Period.”

Bulos reported from Kharkiv, Stokols from Munich, Bierman from Dalton, Mass., and Wilkinson from Washington.