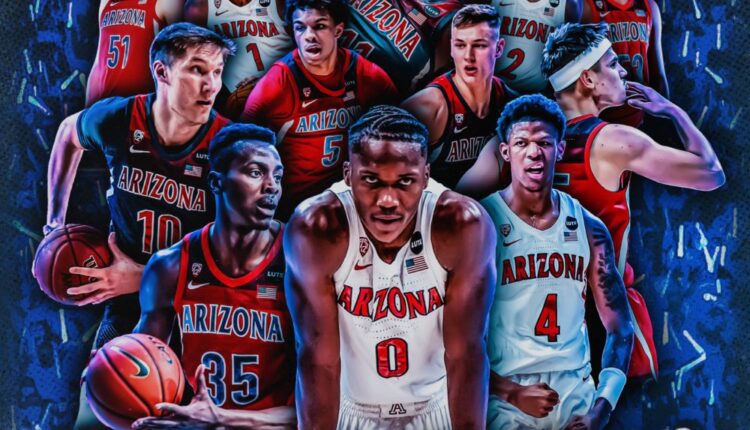 And the Wildcats did it in dominating fashion by beating up on host USC, 91-71, at the Galen Center in Los Angeles.

It’s the school’s 17th Pac-12 title and perhaps one of the most improbable given UA was picked to finish fourth in the conference in the preseason under first-year coach Tommy Lloyd.

But here the Wildcats are: Champions of the conference and a likely No. 1 seed in the NCAA tournament beginning in two weeks.

“It feels great,” Lloyd said on his postgame radio show. “I’m so proud of the guys. For them the take me in as their coach and assimilate so quick and believe so quick that it’s been a lot of fun”

But as Lloyd said it’s not over and he has that coaching disease, so he’ll prepare for Thursday’s game with Stanford in McKale.

“It’ll be fun to celebrate in the offseason, but we still got work to do,” he said. “We’re gonna look to get better and can’t wait to get home and have a great weekend.”

The Cats will savor the victory – it’s 26th against three losses. Lloyd said he can enjoy it later because he has “coaching disease” and there’s a game to be played on Thursday.

Tuesday night’s performance was perhaps the team’s best start-to-finish showing all season, given UA went on offensive streaks early and throughout the game. It jumped out to a 21-8 lead and never really looked back, leading at halftime 51-27 behind performances from, well, everyone.

Five players scored in double figures with Bennedict Mathurin leading the way with 19 points. Kerr Kriisa had 18 points with Justin Kier getting 12 points and Oumar Ballo and Dalen Terry finishing with 11.

Dunks were the killer inside with Arizona getting seven. And on the perimeter Arizona dazzled from beyond the 3-point line, hitting 12 of 25.

It comes after its worst game of the season on Saturday vs. Colorado where nothing seemed to go right. Tuesday was the exact opposite.

Lloyd said he talked to the guys to get over the loss because they had no time to sulk. “Boom, move on,” he said. “They guys did a great job. I just told him we need to come out and (to) attack or be attacked. We need to be aggressive; we need to play loose and free and play with a smile and joy and with some competitive grit that you need this time of year.

“I just had a sneaking suspicion, and I probably created a self-fulfilling prophecy. I thought we were either gonna play really good at Colorado and not good here or vice versa. So, it turned out and this was exactly what we needed to come in and win the conference championship on the road. To secure it outright is pretty special.”

By the time the clock ticked off at Galen Center, many of the UA fans could be heard cheering Arizona’s championship.

The Wildcats used the formula that has worked well most of the year: get the defense to play hard to create problems and then the offense benefits. It did exactly that as Arizona ran off turnovers and created miss-match problems with the Trojans.

“The defense got our offense going which is a lot of times the case,” Lloyd said. “Offensively, I thought we did a really good job of taking control taking good shots and working for good shots.

“Then defensively, they were active. … We had our heads up and they had their heads down. There’s a lot of ways to win a game but there’s nothing wrong with having a 20-point lead at half.”

And being able to cruise – in stye – in the second half, just as Arizona did.