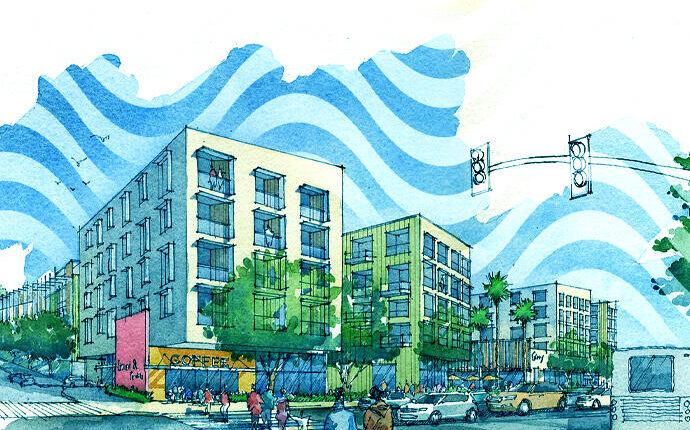 Upscale grocery chain Gelson’s could lose its foothold in Santa Monica to visions of a 521-unit apartment complex on the site of its store there.
SanMon, an affiliate of Balboa Retail Partners of Brentwood, has filed plans to raze the market and other shops at Lincoln and Ocean boulevards for an 870,000 square-foot development, Urbanize Los Angeles reported.

The new Lincoln Center would include 10 five-story buildings containing 521 apartments, 36,000 square feet of commercial space and parking for 880 cars and 816 bicycles.

SanMon is teaming up with Brentwood-based Cypress Equity Investments for the 4.7-acre Lincoln Center Project at 2601-2645 Lincoln Blvd.

“The existing surface parking and outdated commercial buildings no longer meet retail needs, cater to driving and are not pedestrian friendly, its website says. “Redevelopment of the site provides an opportunity to meet community housing needs and our city’s sustainability goals.”

Santa Monica-based Koning Eizenberg is designing the Ocean Park neighborhood project, which would receive a density bonus allowing it to exceed zoning regulations in exchange for adding affordable apartments.

A mix of studio, one-, and two-bedroom units would include 53 affordable apartments for residents at the very low-income level – rented for $700 a month for a studio, $800 for a one-bedroom unit, and $900 for a two -bedroom unit.

SanMon, which bought the property in 2017, expects to break ground no earlier than 2024 .

Though plans call for a grocery store, it’s uncertain if it would be a Gelson’s. The Encino-based chain has 27 markets between Santa Barbara and San Diego, according to its website.

“The grocery store operator will be announced in the near future,” the Lincoln Center site says, in response to a question asking specifically about a future Gelson’s. “Ownership is currently in discussion with various potential grocery tenants that have expressed interest in the site.”

Balboa Retail Partners, founded in 2011, has acquired more than 5.8 million square feet of retail assets across 21 states, with 81 properties valued at $1.2 billion, according to its website.

In November 2021, it filed plans to raze a 104,000-square-foot shopping center in Highland Park and replace it with a 381-unit apartment complex.