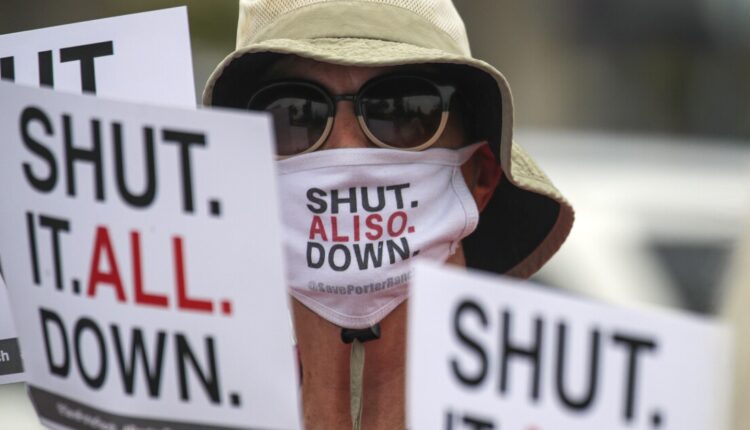 Los Angeles County health officials are calling for an independent study into the short- and long-term health effects on residents near Aliso Canyon in the San Fernando Valley, which was the site of the largest natural gas eruption in US history in 2015.

“We are committed to selecting an independent research group with the broad yet highly specialized expertise needed to further elucidate the health implications of this catastrophic environmental disaster,” said Dr. Paul Simon, the department’s chief science officer.

The announcement was a long time coming for residents of the surrounding Porter Ranch community, which was hardest hit by October 2015’s massive leak from Southern California Gas Co.’s Aliso Canyon natural gas storage facility in the Santa Susana Mountains. The leak lasted 111 days and released more than 109,000 tons of methane – a potent greenhouse gas – and other chemicals into the area.

The effect was felt immediately. People who lived and worked nearby suffered from nausea, nosebleeds, skin rashes and breathing problems, and thousands of families had to evacuate their homes. As the leak continued, video captured by an infrared camera showed clouds of oily gas blanketing the area.

However, many residents have been waiting for years for clearer information about what they were specifically exposed to and what the effects of that exposure might be. Some residents have already expressed concerns about cancer and other long-term health effects.

Some said the announcement felt too little, too late.

“It’s unbelievable that the country’s largest environmental disaster actually exceeds that [Deepwater] horizon [oil spill] Environmental damage is so marginalized and ignored by our authorities,” said Matt Pakuko, president of the Save Porter Ranch group. “Even if they start in a year, it’s seven years too late.”

A spokesman for SoCalGas did not immediately respond to a request for comment Thursday. The utility and its parent company Sempra Energy have both denied wrongdoing.

The health research study will be conducted under a scientific oversight committee made up of experts from six regulatory agencies and seven independent research experts, the county said. SoCalGas is required to pay $25 million for the study under a 2019 agreement with city, county and state governments.

Under the agreement, the gas company cannot pass these costs on to tariff payers.

The company also agreed in September to pay $1.8 billion to settle claims from more than 35,000 victims of the gas leak. As part of that settlement agreement, the county said it would not subpoena SoCalGas to release data on the chemicals released during the blowout – prompting some community members to express concerns the analysis will be incomplete.

LA County Supervisor Kathryn Barger, whose district includes Porter Ranch, said the information obtained from independent researchers will help shed light on the impact of the blowout and inform what else needs to be done.

“After every disaster, we must commit to rolling up our sleeves to make sure people who need help get help – not just immediately after, but over the long term,” she said, adding that she is “eager to to get the job started.”

Barger has called for the permanent closure of the Aliso Canyon Natural Gas Facility, as have numerous community members.

County officials said they intend to select the research team and begin the study by the fall. The research is expected to last two or more years.