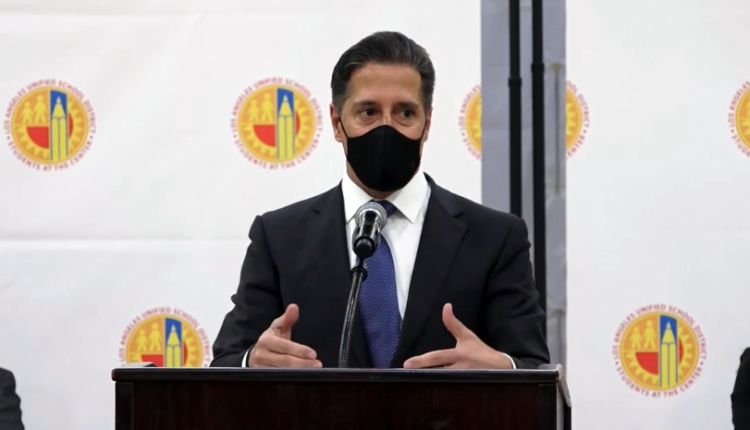 Alberto Carvalho during his introductory press conference on Dec. 14, 2021.

Alberto Carvalho during his introductory press conference on Dec. 14, 2021.

He takes the helm of the largest public school system in California following an unanimous vote of the school board in December. The board, along with parent groups and teachers, are optimistic as they look to Carvalho’s track record of improving student achievement as he begins his four-year contract with the school district, which will pay him $440,000 a year.

LAUSD is home to nearly 450,000 students and is the second-largest public school system in the nation, with Miami-Dade as fourth. Carvalho comes to LA at a time when the district is navigating an enrollment decline and widening gaps in academic achievement between low-income students and their higher-income peers, all exacerbated by the Covid-19 pandemic.

He follows interim Superintendent Megan Reilly, who took over following former Superintendent Austin Beutner’s decision to step down once his three-year contract ended in June. Carvalho said he plans to release a 100-day plan within his first few weeks on the job that will outline both short- and long-term opportunities and challenges.

“People love to bet against LA,” he said Thursday at a virtual gathering honoring him as nonprofit National Education Equity Lab’s superintendent of the year for his work at Miami-Dade. “They used to bet against Miami — no more. So we’re on the brink of something big.”

Carvalho said he plans to expand school options for students, create more academic programs in ZIP codes that have not seen enough of them and push for equitable access to technology to ensure students’ ability to learn. He also plans to address the learning loss resulting from distance learning by reducing class sizes and wants to improve graduation rates by investing in early childhood education.

“Preceding every single achievement gap, there are opportunity gaps, social gaps — vital gaps,” Carvalho said. “Unless we move aggressively in addressing those, the remediation efforts will continue to be much more difficult.”

To help close those gaps, he wants to implement a partnership with National Education Equity Lab, like the one he established at Miami-Dade. The nonprofit focuses on education justice and partners with districts, colleges and universities to provide students in low-income areas the ability to take courses for college credit at no cost.

Though he’s already begun meeting stakeholders and digging into data, he said much of his planning will focus on the needs he finds while on the ground talking to parents and students these first few weeks. He calls his approach demand-driven, as it focuses on what parents and students want and which of those needs have yet to be met.

“I think LAUSD has done remarkable work in terms of engaging communities and bringing the student voice on a number of issues,” Carvalho said at the event. “I think we can do even better and do more. It’s really about putting their voice, their demand into action.”

Since the announcement of his hiring, Carvalho has also expressed concern about the district’s enrollment, which dropped nearly 6% this year, according to district data, a much steeper drop than in recent years. He has also spoken in support of creating pathways for both college and careers and the measures LAUSD has taken to mitigate the spread of Covid-19.

Following the school board’s announcement of his hiring in December, board President Kelly Gonez touted his history in education in a statement.

“As the longtime Miami-Dade superintendent, he established a clear record of positive student outcomes and has relentlessly worked towards greater equity for historically underserved communities,” she said. “I know he will continue that focus in Los Angeles, and he is ready for the challenges and opportunities ahead of us.”

Carvalho, an immigrant from Portugal, started his work in education in 1990 as a science teacher at Miami-Dade, serving as an assistant principal and later a communications officer for the school system following his four years teaching. Since becoming Miami-Dade’s superintendent in 2008, he was credited with improving graduation rates, raising test scores and expanding school choice. Now, he’s one of the highest-paid superintendents in the country as he enters LAUSD and continues to push efforts to close student achievement gaps on the other side of the country.

“LAUSD is ripe, is primed, for rapid expansion of advanced academic opportunities for the students, and why not soar to the very top of that type of experience, particularly targeting, as I said, students who’ve lived, grown up and learned in the gap,” Carvalho said.

What I Buy and Why: Pulse Music Group Founder Josh Abraham Has an On Kawara of His Birthday Date