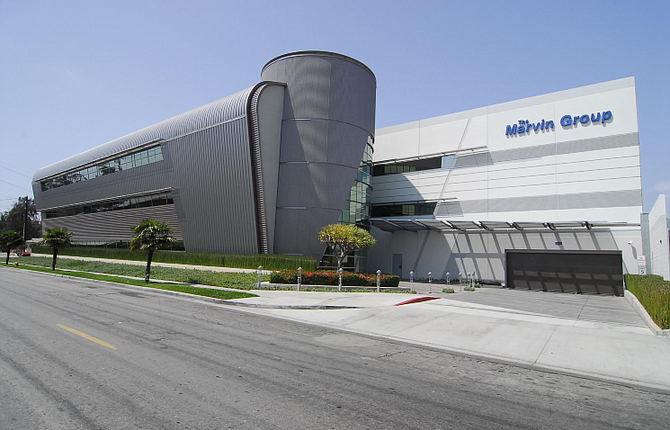 Marvin Engineering, based in Inglewood, manufactures carrier and trigger systems for weapons.

Howard Gussman grew up with Marvin Engineering Co. Inc. on.
His parents founded the company in 1963 as a “small machine shop” in Culver City.
Almost 60 years later, Marvin Engineering has grown into a major player in the aerospace industry.

The Inglewood-based company employs almost 1,000 people and serves customers such as Bethesda, Lockheed Martin Corp. based in Md., Waltham, Raytheon Technologies Corp. based in Mass and Boeing Co. based in Chicago.

“Our vision is to bring security and confidence to war fighters around the world,” said Gussman, chairman and chief executive of the company.

Marvin Engineering manufactures and sells weapon carrier and release systems, also known as alternative mission equipment and aircraft armament equipment, according to the company, to private and government customers in the United States and internationally.

The company has seen explosive growth in recent years, nearly doubling its revenue in the past two years from $ 241.6 million in 2018 to $ 469.8 million in 2020. Gussman attributes the increase to new projects and contracts, including developing alternative mission equipment for Lockheed Martin’s F-35 Lightning II aircraft.
“We were speeding up,” said Gussman. “So we had a boom year after year as we increased the speed of these products going in and out of the plant.”

Marvin Engineering is part of the Marvin Group, which includes two other companies, Marvin Test Solutions Inc. and Marvin Land Systems, which were acquired by the company in 1995 and 1997, respectively.

Gussman said consolidation among the company’s competitors has placed Marvin Engineering in a better position to offer specialized products and services to its customers.

“There has been a consolidation in our industry,” said Gussman. “Many of our competitors are rolling into some of the larger companies.”

As the founding business of the Marvin Group, Marvin Engineering is the top performing and largest segment of the company, said Gussman. It continued to grow during the pandemic and had its highest sales in 2020.

Marvin Engineering, which has been on the Los Angeles Business Journal’s list of Largest Private Companies for 15 years, ranks 56th this year.

The company quickly adjusted to the pandemic, Gussman said. From the start, wearing masks, social distancing, temperature controls, and Covid-19 testing was strict for on-site employees. Gussman said the company had distributed “hundreds” of laptops to those who could work from home.

He added that the pandemic shows the organization’s “maturity and agility”. “We are already seeing a lot of efficiency gains that will come from what we had to tackle,” he said.

Gussman’s goal for Marvin Engineering is to attract talent from competitors by creating a workplace where his employees can grow professionally, he said. He also plans to continue the research and development that Marvin Engineering started with its customers to expand the company’s product line.

“We have worked with many of our customers to bring them solutions that are not available in the military today,” said Gussman. “We have several improved products that offer combat aircraft better capabilities both domestically and internationally.”