A Ukrainian in LA: ‘We have passed the point of no return’ 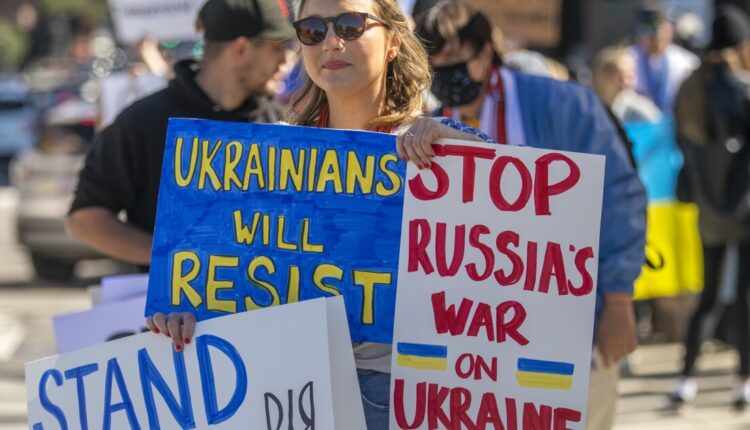 To the editor: When I returned to Los Angeles from Ukraine last Christmas, at the airport I heard “Carol of the Bells,” an English rendition of our Ukrainian song “Shchedryk” by composer Mykola Leontovych. For me, this song represents a delicate triumph of joy over evil. Leontovych was assassinated by a Soviet agent at the age of 43, but his masterpiece has become a Christmas hymn of hope that has outlived the evil empire.

Every time I hear the song, I want to scream, “Hey, this wonderful beauty is Ukrainian! Look at us, we have contributed so much to world culture — do you hear us?”

Now, as my compatriots die to protect their homeland, I ask: Does the world hear us?

We were warned about a possible Russian invasion in December, yet there was no alarm. We’ve been carrying the fight on our shoulders since 2014, and we’ve grown accustomed to terror, anxiety and terrible news. The world did not hear us then.

But now the war is upon us. A close friend in Ukraine who had a gorgeous baby girl born two months ago sent me an Instagram message when the attack began: “It started … we can see the distant glow from our window.” When I asked if she could still flee Kyiv, she said it was too late. My childhood friend texted me that our hometown’s airport had been bombed. “We refuse to succumb to hysteria,” she said. “We are prepared and ready to act if necessary.… It will all be Ukraine.” (That’s our way of saying that everything is going to be better than they hope.)

My paternal grandparents, born near the end of World War II, are in Ukraine. They spent most of their lives under Soviet rule, and now they are experiencing the surrealism of another attempt by the empire to resurrect itself. I cannot imagine the depth of their pain and despair, watching their grandkids being drafted.

Now I am a distant observer, unable to stand shoulder to shoulder with my compatriots, sharing their tears, fears and hopes. My heart, soul and thoughts are with them. We have passed the point of no return and will never be the same again. We shall never let ruthless power dictate our lives and define us.

I will knock on every door, contact senators, protest at Russian consulates, stop giving Russian people a chance to save face by avoiding uncomfortable conversations, and fundraise for the Ukrainian military. I believe in the power of soft power, just like the gentle sound of “Carol of the Bells.” This is the only weapon I have for now.

But it feels like the world still does not hear us.