A sister’s quest to find her missing brother 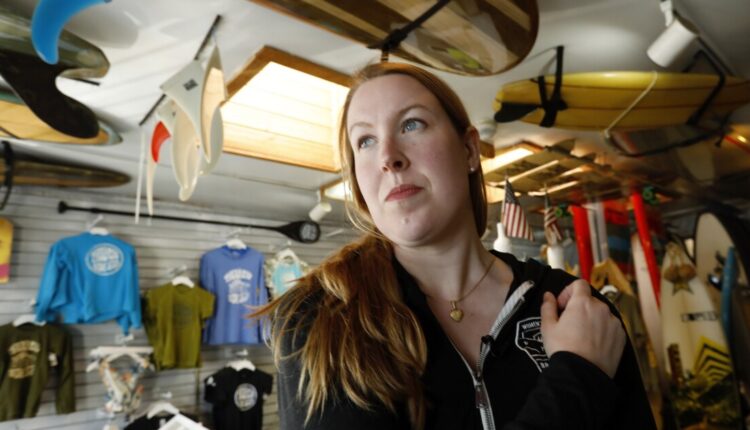 While setting up a chess board at a mental health treatment center in Agoura Hills, Jack Stein looked past his roommate like he’d seen a ghost. The 24-year-old went to his room, laced up his shoes and walked out into the midsummer evening.

That was the last time anyone saw him.

His sister, Zoë Kustritz, is still trying to figure out what happened.

Kustritz, 27, flew into Los Angeles from Cambridge, Mass., last weekend, continuing the search for her only sibling.

As she strolled the boardwalk between Santa Monica and Venice Beach, she handed out stickers she made. “What Jack here?”

Kustritz said her brother had taught surf lessons at a nearby shop a few summers ago. He loved the beach.

One man — a 53-year-old who goes by the name Leaf-n-Thewind — said he’d hung out with Stein a few times. When Kustritz said her brother kept a sketchbook, the man showed her some drawings he believed Stein had created and said: “This is him.”

Stein is one of more than 41,400 adults who went missing in California in 2021 — about 60% of whom were men, according to a report from the state attorney general’s office. Roughly one-fourth of the cases were in Los Angeles County.

Last year, nearly 29,000 people reported missing in the state returned on their own or were found by law enforcement, the California Department of Justice reports.

But not all had happy endings. Over 1,400 missing persons were arrested, and 831 died, according to the state report.

Many agencies consider someone missing for more than a year a “cold case,” according to the National Missing and Unidentified Persons System.

Kustritz wants to make sure that doesn’t happen with Stein.

There have been numerous sightings of people who match Stein’s description, Rincon said, and several deputies think they may have encountered him. But so far, they haven’t been able to track him down.

“I would love to bring him home to the family,” Rincon said. “Unfortunately, even if we find him, if he doesn’t want to return, we can’t force him.” Zoë Kustritz talks to a beachgoer at Topanga State Beach. Kustritz is searching for her brother, who was 24 when he went missing..

Stein graduated from the University of Minnesota in the spring of 2020 with a degree in economics and landed a job as a broker at a financial services company in St. Paul, his sister said.

Kustritz described him as an ambitious and charming person “who could befriend anyone.” He’s also a talented artist, she added, and an accomplished athlete, especially involving anything with a board — surfing, skateboarding, snowboarding.

But he was plagued by psychological demons, his sister said, and for a long time he refused treatment.

Stein began to slide into what Kustritz described as a mental health crisis in May 2021 while living in Minneapolis.

By the end of the month, he had driven to Southern California — a place he told his sister “where I’ve really been calm.”

Stein had quit his previous job and was set to start another — but pushed back his start date when he made the trip west, his sister said.

But things didn’t go smoothly. When he had to leave a second sober living house because of his instability, Stein phoned his mother and sister on June 13. He told them he’d been walking all night — that he was “stuck” and needed help. They immediately flew out.

Kustritz said her family was “totally desperate” to get Stein the help they felt he needed. They called the police and social services to try to have him admitted to a hospital or mental health facility and held there for his own safety — to no avail. Zoë Kustritz puts stickers on Malibu Pier trash cans in the hope that her brother or someone who knows him will see them.

Kustritz and her mother returned home, but came back for a visit the following month.

The two had seen Stein a few hours before he vanished and were eating dinner about a mile or two away when they learned he walked out of the facility about 8 pm July 13. They rushed back as a frantic search began.

Helicopters scoured the area from the air, and a search party fanned out on the ground.

The 6-foot-3, 180-pound stone, who has blue eyes and reddish-blond hair, wasn’t carrying a cellphone or ID when he walked away, officials said.

A missing person bulletin issued by the LA County Sheriff’s Department notes that Stein suffers from bipolar disorder and depression. The Facebook page Help Find Jack Stein says he “is likely looking to hurt himself.”

Over the next few days, the family drove almost every street in Agoura Hills, Westlake Village and Thousand Oaks. They looked for Stein in Malibu and Venice Beach, checking homeless shelters and encampments.

Within a week of his disappearance, the family bought ads on Facebook, Google and Instagram. A friend handed out more than 200 posters from Venice to Zuma Beach. In late December, they paid to have a billboard placed atop a bicycle shop in Venice.

And in February, Kustritz returned to LA for the first time since Stein went missing, to continue her search efforts.

“If he ever shows up, he’s going to be mad at me for all I’ve done to try to find him,” Kustritz said.

But she mused: “It would be great if he was mad at me and showed up.” Zoë Kustritz flew from Massachusetts to Santa Monica to distribute stickers to raise awareness about her brother, Jack Stein, who left a mental health facility several months ago and was never seen again.

Kustritz is hoping her sticker campaign will help get the word out and may connect with someone who has seen Stein or knows where he is.

The orange stickers are based on Stein’s sketches. Kustritz hopes skate and surf shops will carry them.

She visited one area where Leaf-n-Thewind said he’d seen Stein. Several other people said either that they had encountered Stein or he looked familiar.

Though Kustritz doesn’t know how reliable the accounts are, she’s trying to follow up on every lead.

“Hope feels much better than the alternative,” she said.