A master puppet maker in the valley 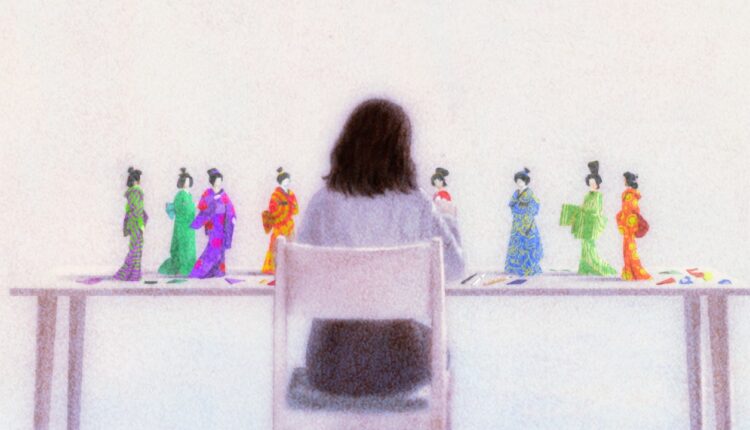 You can find the usual types of dolls – LOL Surprise! OMG Remix Lonestar, My Squishy Little Dumplings, Adora Sweet Baby Boy Peanut and Co. – almost everywhere, but in Japan you can also find other types: delicate, hand-made figures whose heads, hands and feet are coated with a cut oyster shell paste called gofun; some with gorgeous outfits; and Hina dolls with acutely specific names (“An Imperial Servant Expressing Sorrow” for example, or “A family of dolls saying a prayer for the happy marriage of their female child”). These and many other types of traditional Japanese dolls are not intended to be tucked into bed with you or dragged to the playground with your stroller. According to ancient Japanese tradition, they are believed to have souls, absorb spiritual energy, and are only meant to be shown and admired and praised. Sometimes they were even used as proxy for people. For example, newborn babies were given abstract-looking dolls called “heavenly twins” in the hopes that evil spirits might get confused as to which the real baby was and then take possession of the wrong one. Dolls are still so revered in Japan as being the center of attention for at least one national holiday, Hinamatsuri, and when dolls are worn out or disgraced they are not thrown away. Discarded dolls are often buried in Shinto shrines and Buddhist temples known as Ningyo Kuyo. After the prayer, the dolls are collected in piles and burned.

Kumiko Serizawa (1928-2021), master doll maker, was born in Tokyo during the US-Japan Friendship Doll Exchange. This was a program in which American children sent blue-eyed American dolls (representing the idea of ​​what an American looked like at the time) to Japanese children to show goodwill and peace – and to distract attention from recently enacted U.S. laws against Japanese immigration . Japan responded by sending 58 gigantic “Return Gesture Puppets” to tour the United States.

During the Second World War, Serizawa’s parents sent her to the countryside to live with friends of the family for security reasons. A few years after VJ Day, she got a job as a housekeeper and waitress at the Atami Hotel, a U.S. Army facility for R. and R., where her American superiors changed her name to Amy. (Most Japanese people doing business with the U.S. Army were given English names; Kumiko’s fiancé Soroku, who also worked at the hotel, was named Frank.) Japanese employees at the facility were not allowed to eat American food in the hotel while they were working were works. Kumiko was charming enough to get out of trouble when she was caught smuggling a glass of milk.

In 1952, shortly after Kumiko and Soroku got married, he bought her a traditional doll at Takashimaya, a chic department store in Tokyo. She was intrigued by the doll and decided that she wanted to learn how to make one. She took classes at two different dollmaking schools for two years, practicing how to embed silk kimono fabrics in the chunky sawdust shapes used for the bodies of kimekomi dolls, which are usually female dolls with elaborate outfits and simple gofun heads and hands, and how to insert eyelashes into the delicate silk faces of sakura dolls. (She later taught herself how to make the faceless three-dimensional washi ningyo dolls from folded paper.) At the end of the classes, she was given a kanban – a wooden poster that certifies her skills – and given the professional pseudonym Kookyu.

In 1958 the Serizawas, who now had a young daughter, Naomi, decided to emigrate to the United States; they were traveling on a ship with general cargo, some nuns and several orphans. They started a home in the San Fernando Valley. Most of the families of the Japanese-American friends they soon made had emigrated to the United States long before the war, and they viewed the Serizawas with some fascination, for the Serizawas were not forcibly raised in an internment camp like them. but instead had survived the war in Japan. Kumiko settled in California, but she had no intention of shedding traditions. Over time, she began using the master bedroom in her home as a doll-making classroom. She taught groups of up to ten students at a time and guided them through the four or five month process of making a doll.

And of course, she continued to make her own dolls, known for their grace and detail; the realism of her doll’s hairlines was often noticed. She exhibited them at the annual Japanese Nisei Week Festival, a cultural celebration in Little Tokyo, Los Angeles; at the Obon Festival, which honors the ancestors, at the San Fernando Valley Japanese American Community Center; and for more than a decade at the annual Japan Festival at Disneyland. (“Other kids would be so excited to go to Disneyland,” said Kumiko’s daughter Naomi recently. “I was out with my mother so often that I was totally over it.”) Kumiko was right-handed and could never make it Teaching Naomi, a left-handed man, how to make dolls. But when Kumiko’s younger daughter Patty, another rights holder, was a teenager, she and her mother taught doll-making.

“I had a barbie growing up,” Naomi said recently, adding that her mother’s seamstresses made tons of outfits for her doll that she believes she has one of the best-dressed barbie girls in town.

“I had the old fashioned Barbies,” said Patty. “I was the younger sister so that was inevitable.”

And what about Kumiko’s dolls? I wondered if they had received a funeral after they died, but it turns out that they were distributed among their husband, daughters, and former students, where they will live on and on.