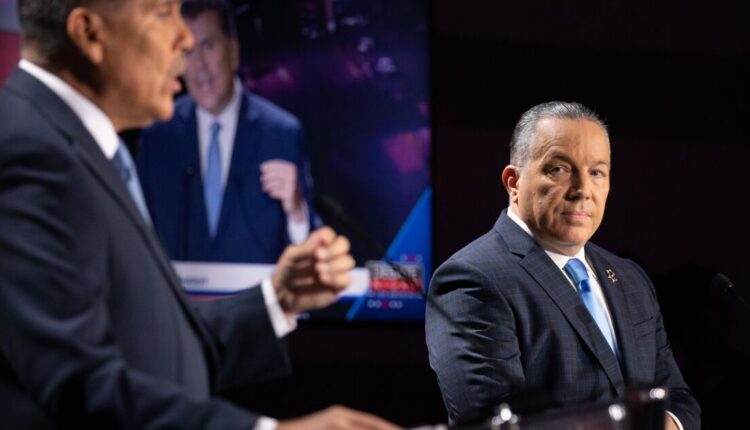 There has been one election endorsement by The Times Editorial Board in recent memory that leaned almost totally on the need to oust the incumbent, and I’m not talking about the 2020 recommendation for Joe Biden for president. Although that endorsement warned reelecting Donald Trump would be a “calamity,” it held up Biden as “Trump’s antithesis,” which is about the nicest thing anyone can say about a candidate. What I am referring to is the board’s recent endorsement of Robert Luna for Los Angeles County sheriff, which says a few nice things about Luna before laying out a devastating case against the incumbent, Sheriff Alex Villanueva.

Before going any further, let me acknowledge that Villanueva may very well use this newsletter as political attack fodder; he’s behaved similarly when our opinion writers crossed him before. He’s been running as much against Luna as the Los Angeles Times, which is his right (though his people might want to run spell-check on their copy before posting an ad targeting specific journalists at The Times — conspicuous typos tend to blunt the intimidation factor ).

Such pettiness and pugilism by themselves ought to give a voter pause before filling in the bubble next to a candidate’s name; when that candidate is the top sworn law enforcement officer in a county of 10 million people, it ought to be disqualifying. But Villanueva doesn’t just pick fights with political opponents; he’s also demonstrably bad at his job, which is the focus of The Times’ endorsement. To wit:

“Questioned early in his term as to why he would rehire a deputy who had been fired for suspected domestic abuse, he lectured the Board of Supervisors on his interpretation of sexual harassment (a non sequitur) and on his supposedly unfettered authority over department personnel. He was wrong on the law, lost the battle, and attracted new scrutiny from county lawyers and personnel managers over his hiring practices.

“He claimed to have established a ‘truth and reconciliation’ process ostensibly to permit residents who had been unfairly treated or injured by the Sheriff’s Department to air their complaints, as well as to give fired deputies a chance to regain their jobs. But he broke his commitment to have procedures vetted by the Civilian Oversight Commission, and revealed by his actions that the purpose of ‘truth and reconciliation’ was solely to reinstate fired deputies.

“He fired his budget staff, claiming he could manage the department’s finances better without them, and ended up mismanaging an inherited shortfall so completely that the supervisors put the department on a carefully managed spending plan.

“He fired the officials who advised the department on policies and conduct that run afoul of the Constitution. He criticized rules for reporting minor uses of force. He called for the return of metal flashlights for deputies to use as weapons against jail inmates. He called for an end to rules limiting force against inmates.

“He hurled an ethnic slur against a county supervisor, baselessly called the inspector general a Holocaust denier, defended deputies who improperly arrested a reporter (and repeated demonstrably false statements about the incident) and suspected virtually everyone who has questioned or criticized him of being part of a left-wing, ‘woke’ cabal out to get him. He turned much of his weekly social media presentations into gripe-fests against his critics and perceived adversaries.”

And on, and on. All Luna would have to be to deserve support is a nice guy who takes good advice, but as the editorial board points out, he’s an accomplished leader who ran the Long Beach Police Department for seven years. So he should be our next sheriff.

Now’s the time to show how much we really mean, “Protect seniors.” An argument against maintaining rules and restrictions to fight COVID-19 was that there were more targeted ways to protect segments of the population at greater risk of death that do not limit the freedom of everyone else. Well, now that President Biden has (recklessly) declared that the “pandemic is over,” and compulsory masking is mostly a thing of the past, we’ll see how many of us are willing to make good on the assurance that seniors and the immunocompromised will be protected in the absence of mandates. Retired journalist Kathleen Quinn has a simple request for doctors and hospitals: “Please make your medical offices safe for us to enter by using N95 masks and top-rated HEPA air filtration.” LA Times

The accusations against Brett Favre are not just another NFL scandal. The state of Mississippi sued the legendary quarterback in May to recover $1.1 million in welfare funds he received. According to the state, Favre tried to help divert at least $5 million in public money to build a volleyball court at the university where his daughter played volleyball, right around the time he was inducted into the NFL Hall of Fame. Columnist LZ Granderson suggests a punishment: “The Hall of Fame rules may make it impossible for the NFL to expel Favre, but as we witnessed with Colin Kaepernick, the league can certainly ostracize him. For if owners thought protests during the national anthem threatened the integrity of the NFL’s precious shield, then where does ‘sued for taking financial assistance from the poorest among us’ fit in that picture?” LA Times

It’s getting hotter in LA Air conditioning should be a safety requirement. State lawmakers failed to pass a bill requiring cooling for residential units earlier this year, but local leaders are thankfully stepping up. The Los Angeles City Council is considering a motion to “require sufficient cooling apparatuses” in rental units, which would follow the example of other cities in warm climates that set maximum temperature for renters. “Heat is the nation’s deadliest climate hazard,” writes the editorial board. “California chronically undercounts its toll and has failed to adequately address it. We can think of few priorities more worthwhile than protecting people from preventable illness and death inside their homes.” LA Times