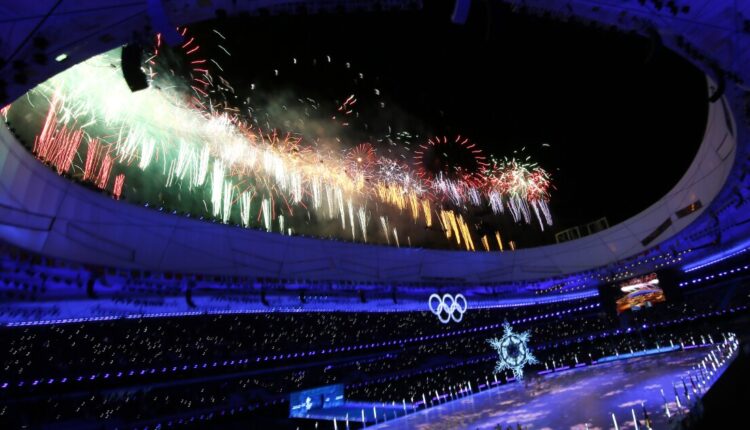 After nearly three weeks, both joyous and problematic, this city had reason to celebrate with golden fireworks exploding across the black sky above the stadium known as the Bird’s Nest.

“I’m so grateful to China for everything they’ve done for this event,” the new superstar of freestyle skiing said. “I think this is a monumental moment.”

As children carried traditional lanterns across the stadium floor, dancing beneath a giant snowflake, Sunday’s closing ceremony rejoiced in the fact that thousands of athletes had convened from around the world with no significant coronavirus outbreak. Amid dire predictions, a strict “closed-loop” system had pushed daily cases to zero by the end.

But for all the obvious triumphs in Beijing, these Olympics never escaped dark clouds that loomed overhead from the start.

No blazing downhill run could be fully distracted from China’s troubling human rights record. No hockey shootout could offset what happened in women’s figure skating, a premier event besmirched by doping allegations and scenes of a crestfallen young athlete harangued by her coach.

“I was very, very disturbed,” said Thomas Bach, president of the International Olympic Committee. “It was chilling to see this.”

In all, nearly 3,000 athletes assembled to compete in seven sports, vying for gold in 109 events. Thousands more coaches, officials and journalists joined the Olympic bubble, a city within a city, insulated from the public by security personnel and miles of chain-link fencing.

With the Omicron variant still surging in early February, credentialed participants were given a choice: Either get vaccinated or isolate for three weeks in advance. Thousands of tests were administered each day and few spectators were allowed in the stands.

By Games’ end, positive coronavirus results totaled just 437. Organizers were not as effective at tamping down other problems.

Hot-button political issues — the persecution of Muslim Uyghurs and other ethnic minorities, crackdowns on Hong Kong protests, aggressive policies directed at neighboring countries such as Taiwan — refused to subside.

Activists mocked the Games’ motto, “Together for a Shared Future,” and the conversation turned chippy at a news conference last week when journalists asked about concentration camps and forced labor in the Xinjiang region.

“I feel obliged to make a quick comment,” Yan Jiarong, an organizing committee spokeswoman, blurted out. “I think these questions are based on lies.”

An IOC spokesman tried to focus the dialogue on sport but Yan shifted to politics again, responding to questions about Taiwan, whose sovereignty her country contests.

“I want to say there is only one China in the world,” she said. “Taiwan is an indivisible part of China.”

“You embraced each other, even if your countries are divided by conflict,” International Olympic Committee President Thomas Bach told athletes at the closing ceremony.

There was no such discord in the closing ceremony, which had fans waving plastic clappers, making a sound that approximated either rain or a swarm of locusts. Highlights from the games played on the scoreboard, but even sports, which were supposed to draw attention away from controversy, had been problematic in Beijing.

Shortly after Russian figure skater Kamila Valieva helped her country to gold in the team event, it was revealed the 15-year-old had quietly tested positive for a banned substance weeks before, the result languishing in a Swedish lab.

Olympic officials tried to disqualify her, but an international court ruled that she could continue to skate while her case was investigated. During the women’s final on Thursday, the pressure clearly got to Valieva as she stumbled through her program and tumbled out of the medals.

Television cameras captured a coach advising the teenager while her teammate, Alexandra Trusova, grumbled about finishing second to another Russian, Anna Shcherbakova, who was left to sit alone.

The optics could not have been worse for a games — and a host — trying desperately to put on their best face.

“Even though [China] constantly rails against foreign forces, there is this attempt to get this kind of stamp of approval,” said Angeli Datt, senior research analyst at the Freedom House human rights group.

It was left for Sunday’s ceremony to adopt a sense of resiliency.

The athletes took the field en masse after soldiering through distractions, coronavirus restrictions and the fear of landing in isolation with a positive test. At mountain events, they had weathered subzero temperatures and gusting winds that sent halfpipe skiers slamming into the wall. 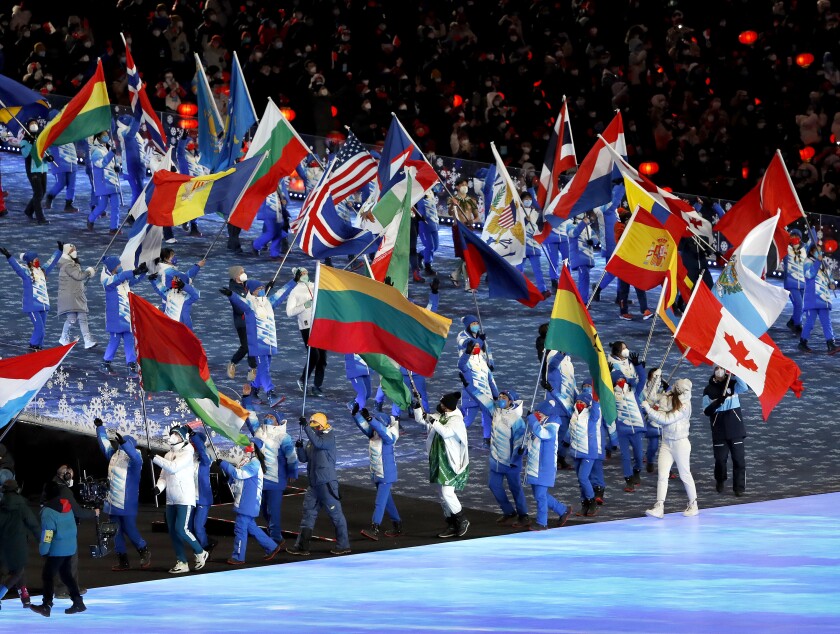 (Gary Ambrose / For the Times)

The crowd showed its appreciation on Sunday, roaring when it spotted Gu in the parade of athletes. The Norwegians marched out with arms raised, jubilant, having finished atop the medal count with a Winter Games record of 16 golds.

“It’s amazing how a country with only 5.5 million people can take so many medals,” said Haavard Holmefjord Lorentzen, who contributed a speed-skating bronze. “We are really good at winter sports.”

Things did not go as well for US skiing star Mikaela Shiffrin, who failed to reach the podium in any of six races and called herself “a joke.” But Chen overcame his disappointment from four years ago, and 36-year-old snowboarder Lindsey Jacobellis settled an even older score, earning two golds some 16 years after a spectacular blunder had cost her victory at the 2006 Torino Games.

They helped the American team surpass pre-Olympic forecasts, ending up fourth among all nations with eight golds and 25 total medals.

“If the outcomes were completely predictable,” said Sarah Hirshland, chief executive of the US Olympic & Paralympic Committee, “this wouldn’t be any fun for any of us.”

Chinese officials might have appreciated a bit less volatility. They ended the games with a ceremony that, much like the opening, was subtle and subdued.

Tradition dominated the evening with the lowering of the Olympic flag, extinguishing the torch, a symbolic handoff to Milan-Cortina, the Italian host in 2026, and the usual speeches.

“You embraced each other, even if your countries are divided by conflict,” Bach told the athletes. “May the political leaders around the world be inspired by your example of solidarity and peace.”

Hundreds of volunteers walked toward the center of the stadium with illuminated willow twigs in hand. The thin branches are part of Chinese tradition, a gift to dear friends as they depart.

Organizers described it as a “bittersweet” farewell. That might have been the best possible description for these games. 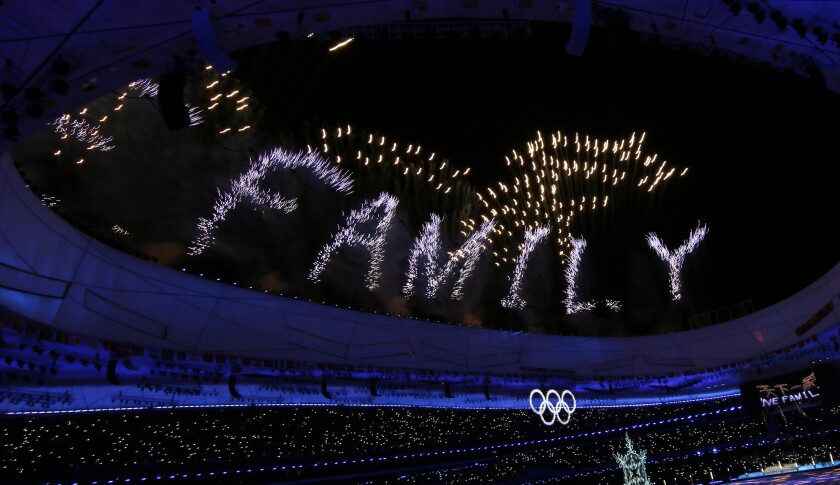 The word family is displayed with fireworks at the end of the closing ceremony at the Beijing 2022 Olympic Games.

(Gary Ambrose / For the Times)

If You Have Alzheimer’s, This Is When You’ll Begin To Feel Symptoms — Eat This Not That