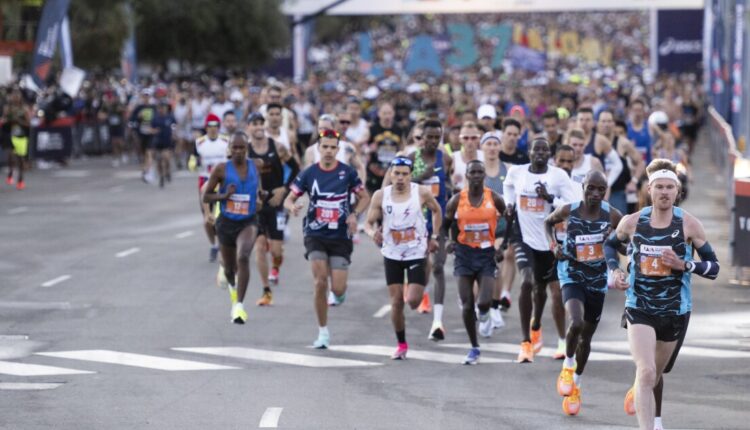 Thousands of amateur athletes took to the streets early Sunday as part of the 37th annual Los Angeles Marathon.

The race was expected to include about 15,000 runners from around the country — and the world — covering a 26.2-mile course that spans some of the city’s most iconic neighborhoods. Runners will enjoy ideal weather conditions, with sunny skies and cool temperatures – highs in the mid-70s – forecast for much of the day.

Most participants are expected to take three to five hours to complete the course from downtown Los Angeles to the finish line in Century City. But many of the elite runners, including some of the fastest in the world, typically finish the race in a little more than two hours.

The 2022 route mirror’s last year’s to a T — including a twist at the end that departs from earlier races (before 2021).

Runners began at Dodger Stadium and will continue through downtown before turning northwest past Echo Park Lake and into Hollywood. Wheelchair-using participants got things started at 6:30 am, followed by elite women runners at 6:45 am and elite men at 6:55 am

A chorus of Taiko drums, cheers, applause and dog howls welcomed runners and wheelchair competitors as they began their journey uphill on First Street downtown.

“This is the steepest part and the cheers really help,” said spectator Jess Gonzalez, 33, holding her dog, Shark. Gonzalez and her cousin, Zafer Jelil, woke up at 4 am and drove from their West Valley home to downtown so they could cheer on Gonzalez’s finance, Edgar.

As a former competitor, Gonzalez said this year’s marathon felt special because it was both post-pandemic and
because her fiancé, who is Ukrainian, would be running with his country’s flag.

She and her cousin held up a sign offering encouragement: “Go! Go! Go! Edgar!”

The marathon route continues through Beverly Hills and into West. LA Runners will then double back on San Vicente, Sepulveda and Santa Monica boulevards before finishing at Avenue of the Stars in Century City.

Dozens of roads and freeway ramps are closed to make way for the runners. The marathon forced the closure of large stretches of Sunset Boulevard, Hollywood Boulevard, Santa Monica Boulevard and dozens of side streets.

Freeway ramps for northbound and southbound lanes of the 110 and 101 freeways, as well as southbound 405 freeway, will be affected at different times during the race.

When your second home is the first one you buy, World News