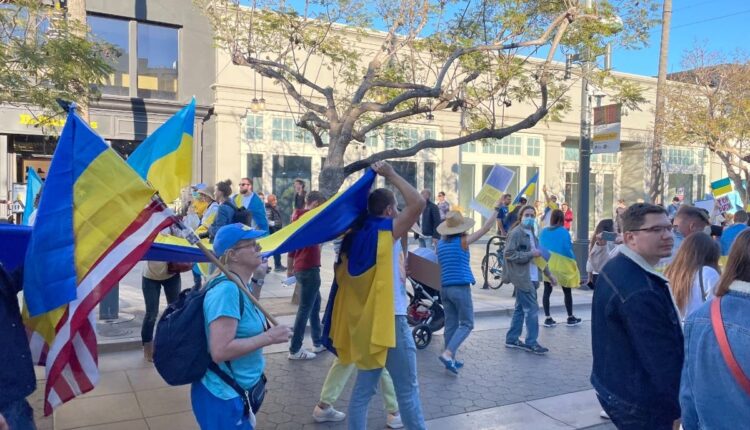 SANTA MONICA, CA — Russian forces continue to tear through Ukraine, and Californians are stepping up to render aid to families caught in the war zone — including their pets.

Since the war erupted on Feb. 24, 202 schools, 34 hospitals and more than 1,500 residential buildings have been destroyed in Ukraine. As of Monday, nearly 1,000 towns and villages were without water, electricity and heat, according to Mykhailo Podoliak, an advisor to Ukrainian President Volodymyr Zelenskyy.

The invasion was particularly upsetting for Ukrainians in California, who are praying for friends and family, donating money and supplies and attending demonstrations.

More than 90,000 Californians have Ukrainian ancestry and make up about 15 percent of the nation’s Ukrainian population, according to the 2019 American Community Survey, The New York Times reported.

Here are 10 active efforts in California that are helping refugees and citizens of Ukraine.

Hannalee Pervan of One House Bakery in Benicia said she’s been baking for 20 hours a day to raise money for Ukrainian children in need, The Mercury News reported.
Pervan, who co-owns the bakery with her parents, Catherine and Peter Pervan, donated ingredients and labor to make Ukrainian-inspired pastries that can be purchased online, with 100 percent of sales going to Save the Children Ukraine Crisis Fund. Donations can also be made directly on the bakery’s website. A staffer has also been selling hand-crocheted Ukrainian flag potholders for $15 each.

The Bay Area bakery’s goal is to raise $10,000 for the national crisis fund.
“I know it’s urgent, and people need help right now. I can sleep later,” Pervan told the newspaper.

San Leandro resident Jena Dzitsiuk, who was born in Ukraine, has been working to support pet owners and help transport street dogs to the US for adoption and care. Dzitsiuk’s own dog, Zoob, is a Ukrainian rescue.
Last week, she announced on Facebook that rescuers with the nonprofit were able to escape Kyiv with 35 dogs.
“Finding transportation in a war zone for 35 animals was close to impossible but since we have received so many donations from you all, and we have some very dedicated and brave volunteers, we were able to make it happen,” she said on Facebook.
To date, the nonprofit has raised $21,955 of its $25,000 goal.

The Southland school district is gathering gently used or new items between Monday and March 21 to help Ukrainian refugees. Donations will be distributed to a nonprofit, Love Is Real Movement.
The district has requested the following items.

The LA-based organization is working to send medical teams to Ukraine to expand access to emergency health care and mental health services for refugees and those living inside the war zone.

Californians can make a monetary donation to help the organization deploy teams to provide services to those in need.
Donate here.

The Bay Area nonprofit launched the Anhelyk Foundation to raise funds for children whose parents died fighting in the Russian-Ukrainian war. The project also offers scholarships for children of the war.
To date, the organization has distributed $99,285 in funding to children in need.
Donate here.

With the help of its partners in Ukraine, the Southern California organization moves children out of orphanages in Mykolaiv and Kherson and reunites them with their families or gets them into new homes.

Since the invasion, Kidsave’s team has had boots on the ground in Ukraine to secure passenger vehicles, fuel, food and shelter while it works to transport hundreds of kids and families out of the country.
Donate here.

Neighbors Abroad, a Palo Alto-based nonprofit, partnered with a European children’s organization to raise more than $24,000 for children in Ukraine.
Jeannet Kiessling is the president of the German division of the children’s organization, “Kleine Herzen” (Small Hearts), which operates near Neighbors Abroad’s sister city of Heidelberg, Germany. She told Patch on March 1 that she’s heartened by the large number of donations since the fundraiser was set up on Friday. Most have come from local Bay Area residents.
Donate here.

The Palo Alto nonprofit raises awareness about Ukraine in the US Since the invasion, the organization has pivoted to humanitarian efforts for children and families.
All donations are currently going to frontline volunteers working to provide emergency resources to refugees and citizens of the war zone in Ukraine.
Donate here.